Looking over a two-year period, January 2019 national TV revenues were up 2% over January 2017.

In fact, U.S. advertising is expected to grow 2% in the first quarter and 7.6% for the full year for 2019, according to Standard Media Index.

In January, corporate media owners' revenue showed that both Comcast Corp. and Google had a 10% share of media spend. Walt Disney had a 9% share, while 21st Century Fox and CBS Corp. were at 8% each and WarnerMedia, Discovery and Facebook had 4% each.

National media deals run through agency trading desks were also at a 4% share. Viacom was at 3% share, while the remaining 35% share was with other national media sellers.

Just looking at the national TV marketplace, SMI says there was a 2.4% decline in ad revenues for January 2018 -- and that this was largely attributable to pre-Olympics media buys, which artificially pushed up overall demand. (NBC airing of the Olympics was in February.)

Although NFL programming continues to pull in major advertising revenues, NFL playoff games were down a collective 9% in gross revenue -- despite airing 2% more paid advertising units.

The two NFL conference championship games were down 8% from a year ago, for a total of $210.2 million in ad revenue.

SMI data comes from raw invoices -- actual dollar amounts spent on each ad buy -- from five of the seven media agency holding groups as well as independent media agencies, making up 70% of the national TV market. 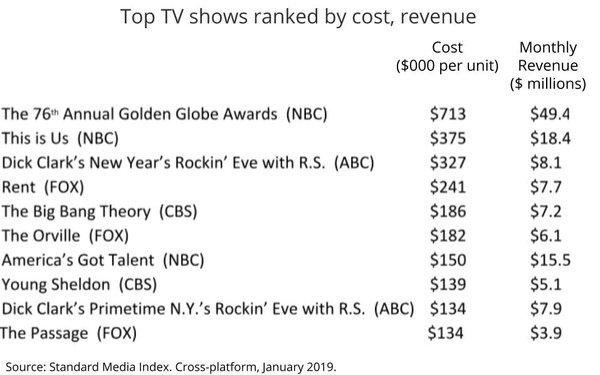