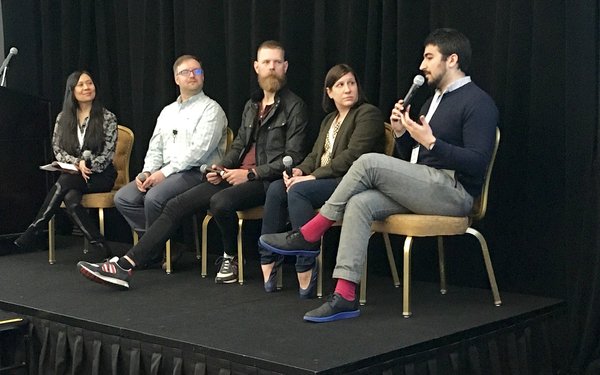 Among the panelists in this morning’s session at MediaPost’s Brand Insider Summit D2C in Austin, was Andy Anderson (second from left), media planning and buying management at Aflac, a company that is more than 60 years old. (His fellow panelists’ firms are much, much younger.)

In talking about Aflac, Anderson admitted that “the door handles are warmed when we get ready to go.” One thing that he is proud of is that Aflac has never lost sight of its passion for being able to be there for consumers in their times of need.

“We have a lot of technology debt on our side,” Anderson said, “but the model has shifted. We’re looking at the evolution of the platform. It’s caused us to think more holistically, to bring down some walls.” But from a measurement perspective, he admitted, the walls are slowly falling.

”It used to be just awareness. We’ve started to align KPIs through the upper portion of the funnel, and work on the back end with digital.

“The state of where we are at as a company forces us to think holistically. We gotta get our ducks in a row,” he said, to audience chuckles.

Anderson said his heart is in TV. “We’ve been able to push more in above-line channels so our budget is right sizing with addressable TV usage. We are often chipping away at budget to above-line awareness metrics, OTT, addressable. FEP. We’re still finding our way to moving more in the DR side of house.

“It’s a delicate battle, going from brand to DR media, and we all know what happens there, the rate base increases. So we’re back at square one and taking measured, incremental steps towards DR.”

Regarding social media, Anderson said that for Aflac “it’s a hybridized approach. We are in a more highly regulated industry and need to make sure there is adequate handling of consumer communications. We lean into agency partners from a brand perspective To carry a common thread of message throughout creative.

“There needs to be a consistent voice and feel but the way it is portrayed on social media needs to be such that it doesn’t appear that we are a 64-year-old company on Instagram.”

There are two brands Anderson has been pleasantly surprised with, he said, answering moderator Ly Tran’s question. (Tran is chief media officer at Proof Advertising.) The first is Keeps. He likes the entire buying process, prescribed medication, “it works well for me. It’s all good.” The other is Credible. He is now refinancing student loans. “It did a wonderful job in matching me with a rando company in Kentucky and saves 2% off” his loan rate.