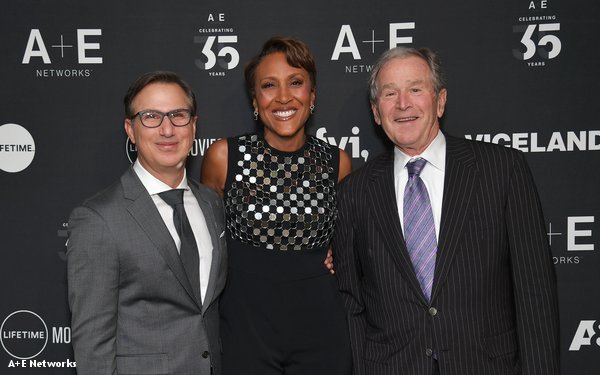 At its annual upfront presentation in New York Wednesday evening, A+E Networks turned to A-list celebrities, and a former U.S. President, to outline its upcoming programming slate and tout its success.

President George W. Bush opened up the presentation, where he discussed his appreciation for history and took some not-so-subtle jabs at the current occupant of The Oval Office.

“The institution of the President is more important than the occupation of the office,” Bush told the crowd. “Therefore, I am optimistic about our future, because I understand that democracy is self-correcting.”

Bush was introduced by Paul Buccieri, president of the A+E Networks Group. It was his first upfront since taking the helm of the group last July.

He said he was looking forward to watching the History channel when he returned home to Dallas.

Bush is the second former President to speak at A+E’s upfront in the past three years. In 2017, President Barack Obama addressed the audience of media buyers and advertisers, in what was his first public appearance since leaving office.

A+E revealed new extensions of the History brand at the event, including a History-branded live speaker series, a HistoryCon convention, and a podcast series called "History Speaks."

Stallone will executive produce a drama series for History with the working title “The Tenderloin” about an NYPD squad leader. Historian Doris Kearns Goodwin is also working with History on a docudrama about President George Washington, while William Shatner will produce a series exploring strange and inexplicable mysteries.

Brooks will be the focus of a four-part “Biography” series about his life and career, including exclusive interviews and access to his stadium tour.

Roberts, who is the executive producer of an upcoming Lifetime movie about kidnapping victim Kamiyah Mobley, announced the channel is committing to 150 new original movies, including a documentary event produced by actress Leah Remini and Olympian Aly Raisman that will give a platform to victims of sexual assault.

The entire presentation lasted only about an hour, with a brisk pace. One media buyer at a large agency told Television News Daily  they appreciated the focus on talent and (relatively) short run time, adding that the company has been holding meetings in agency offices to discuss more specific details.

“We at A+E Networks are committed to original content,” Olsen added in brief comments to close out the presentation. “That is what drives our company, and it drives this whole industry. We are committed to innovating to meet your challenges. A year ago we were the first ones to step up and say we were going to guarantee on business outcomes, and we aren’t stopping there.”’