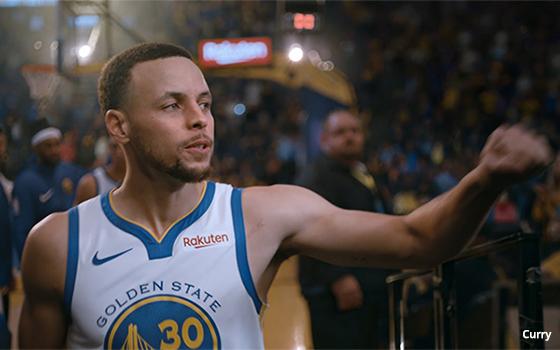 The first of two TV spots, both developed with Duncan Channon and directed by Vania & Muggia, follows a couple purchasing home-furnishings products using Rakuten to receive discounts to land tickets to a Warriors game, where Curry fist bumps with the lady.

The second shows an owner training his unruly puppy not to destroy his house, thanks to money saved through Rakuten's cash back program. View the work here.

As part of the continued “Life to the Power of R” messaging, these new TV spots air nationally in the U.S. and Canada alongside Rakuten spots “Runner” and “RSVP” that launched during the 2019 Grammy Awards.

Those earlier spots have proven effective by increasing aided awareness of Rakuten by eight points during the first three weeks on air and daily search quadrupling since launch, reports the company.

Now, Rakuten intends to double down on this success needed to battle giants like Amazon, Facebook, and Google.

“Partnering with a brand ambassador of Stephen Curry’s caliber is a first for Rakuten North America as we build the Rakuten brand in the United States," says company CEO Amit Patel. "We’re extremely proud to be collaborating with one of the greatest players in the NBA and a champion for all those who rise above expectations as they pursue what they love.”

As global brand ambassador, Curry will play a "pivotal" role in growing the Rakuten brand in the U.S. through appearances, brand marketing and other promotions, says the company.

The Japanese-based company declines to discuss the financials behind his endorsement package. But in 2017, Rakuten reportedly paid Curry's team Golden State $60 million for a three-year deal to feature the brand on team jerseys.

“Life to the Power of R” is the first campaign for Rakuten by Duncan Channon, which was selected as the creative lead agency for Rakuten’s North American launch in a review last fall.