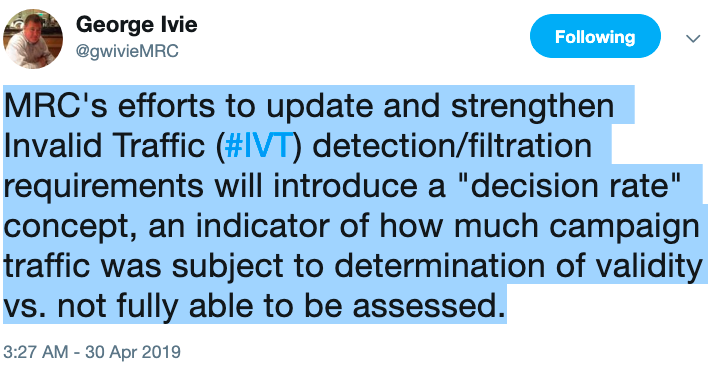 Industry media ratings watchdog the Media Rating Council (MRC) next week will begin overhauling industry standards for detecting and filtering invalid digital media traffic, including the introduction of a new concept that will factor how much of a digital ad campaign’s traffic can be determined to be valid.

The MRC “will introduce a ‘decision rate’ concept, an indicator of how much campaign traffic was subject to determination of validity vs. not fully able to be assessed,” MRC CEO and Executive Director George Ivie announced on Twitter this morning.

Details were not disclosed at press time, but Ivie responded to a comment on his tweet explaining: “This is essentially akin to a measured rate (for viewability) and in this case represents an indicator of what portion of traffic is measurable for IVT where a validity decision can be made. Further details to unfold as part of working group discussions.”

Ivie also tweeted earlier that the new effort will include “enhanced guidance on sourced traffic, tag avoidance/evasion, pre-bid/serve techniques and discrepancy management,” and encouraged interested industry players to contact the MRC if they would like to participate.

The term “invalid traffic” is a catch-all for a variety of forms of digital audience traffic that may also include explicit forms of advertising fraud.

The MRC launched an initiative to modernize and strengthen industry standards for detecting, filtering and disclosing various forms of invalid traffic nearly five years ago and has introduced a variety of guidelines and updates since, as well as accrediting a number of services that detect it (see status of accredited vendors here).

The MRC also confirmed that the new updates will impact Sophisticated Invalid Traffic guidelines, as well.

"Invalid Traffic is defined generally as traffic that does not meet certain ad serving quality or completeness criteria, or otherwise does not represent legitimate ad traffic that should be included in measurement counts. Among the reasons why ad traffic may be deemed invalid is it is a result of non-human traffic (spiders, bots, etc.), or activity designed to produce fraudulent traffic."
ad campaign, ad fraud, advertising, digital, media, media measurement, ratings
Next story loading