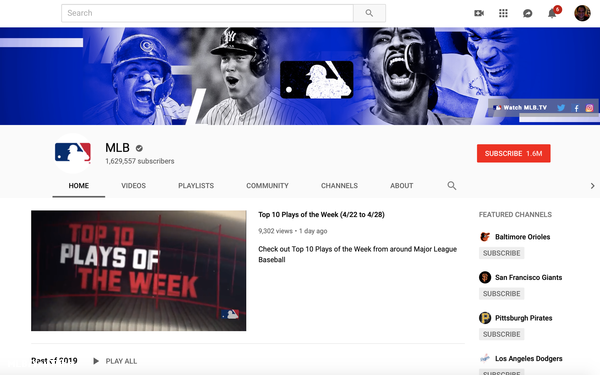 YouTube has inked a deal with Major League Baseball too exclusively stream 13 live MLB games during the second half of the 2019 season.

The 13-game package will stream on the MLB channel on YouTube platforms globally. The games are exclusive to the platform in the U.S., Canada and Puerto Rico.

The games will include pre- and post-game shows, and will be produced by MLB Network. The exact match-ups and dates will be announced in the coming weeks.

YouTube also expects to incorporate some of its popular creators into the live coverage. The deal marks a significant expansion in the partnership between YouTube and MLB.

Now, YouTube will get exclusive games for its platforms. The deal is similar to one the league struck with Facebook last year, which saw MLB Network produce live games for Facebook Watch.

MLB has been streaming games online since before YouTube existed. The company streamed its first game in 2002 and began offering its out-of-market MLB.tv package shortly thereafter.