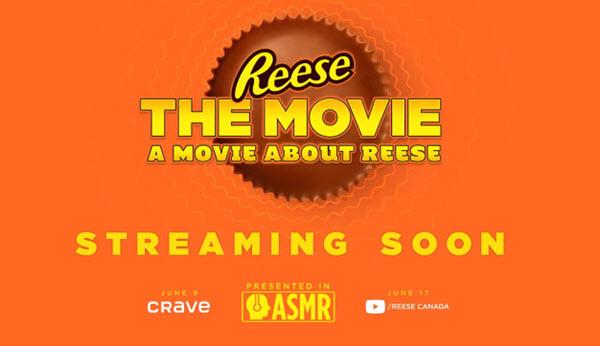 In one of the longest branded ASMR efforts to date, Reese Canada and Anomaly have produced an 82-minute opus, backed by heavy marketing that includes a commercial takeover of “The Handmaid’s Tale” Season 3 premiere in Canada.

Ritual? According to the brand, research revealed that fans go through five methodical steps each time they eat a Reese: interacting with the package, opening the package, sliding out the cup, unwrapping the cup, and indulging in the cup.

Further, fans stick to their own ritual ways of eating the cups, such as squishing it before consuming it; “inhaling” it in one bite; eating the edges first; and savoring or prolonging the eating experience as long as possible.

The Reese Ritual is about “relaxing and immersing oneself in the present moment, which aligns with the relaxing tingling sensation of ASMR,” says the brand.

“It’s this uniquely methodical and mindful approach to eating the Reese Peanut Butter Cup that helped the Hershey Canada team coin the Reese Ritual,'" elaborates Jackson Hitchon, head of marketing, Hershey Canada. “It also opened the door to parallels between eating the Reese and ASMR. The two go together as seamlessly as chocolate and peanut butter.”

In Canada, interest in ASMR, often used for relaxation or meditation, has grown 9.8 times over the past five years, reports Hershey.

The movie -- shot by Andre Turpin, the cinematographer for Adele's "Hello" video -- is being supported by an ambitious marketing strategy.

In phase one, a 15-second trailer (below) was released on Reese Canada’s YouTube channel this week, and is also being used as a TV ad and shown in Cineplex theaters. Preview ads are airing on Facebook, Instagram and YouTube, and film posters went up in transit shelters in key Canadian markets.

In addition, Bell Media — owner of a TV network and the Canadian entertainment platform Crave, which includes premium movie channels — has begun running promotions, co-branded with Reese, of the “Handmaid’s Tale” new-season premiere on Bravo on June 9.

Reese’s purchase of all ad time on that first episode, in Canada, to offer sneak peeks of its ASMR movie, will represent the first commercial takeover by a single brand of a Bravo show, according to Hershey.

“The Handmaid’s Tale” was chosen because of its cult following; viewing it is a weekly ritual for its devotees, says the marketing team. In addition, Reese fans tend to eat the candy while viewing TV in the evenings.

The full movie will debut on Crave, also on June 17, followed by a wide release on YouTube.

This is the first time that Crave will distribute a movie produced by a brand within the platform, and the Reese movie will be featured on Crave’s homepage just as any other movie is featured, Hershey reports.

The premiere phase will also include social and online ads, and homepage takeovers of IMDB, YouTube, Rotten Tomatoes and Spotify.