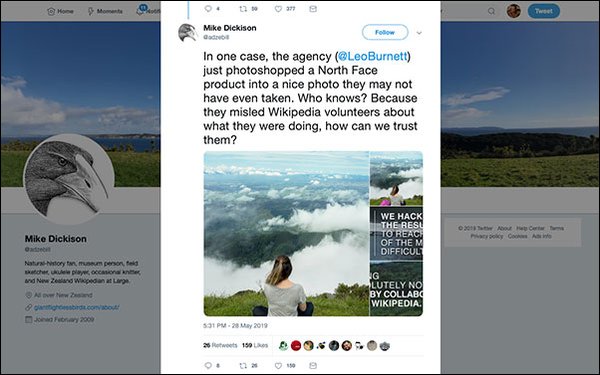 Wikipedia publicly called out The North Face after the brand and its advertising agency Leo Burnett Tailor Made used the organization to promote its products.

The North Face and its advertising agency Leo Burnett Tailor Made used Wikipedia to drive awareness of the brand in Google Image search results by switching travel destination photos with product placement shots -- a move that is raising eyebrows among some search marketers.

Wikipedia is the most visible website in Google search results globally, based on its performance in ten countries, including the U.S., UK, Germany and France, according to data released by Searchmetrics in February.

"Wikipedia and the Wikimedia Foundation did not collaborate on this stunt, as The North Face falsely claim [in the video],” according to a post by Wikimedia Foundation. “In fact, what they did was akin to defacing public property, which is a surprising direction from The North Face. Their stated mission, ‘unchanged since 1966,’ is to support the preservation of the outdoors’ — a public good held in trust for all of us.”

The promotional video for the campaign posted on YouTube describes how the brand and its agency partner accomplished the task of switching destination images for product placement images. The video begins by acknowledging that most trips begin with a search on Google, and states that the first image typically is from a Wikipedia article about the destination.

The brand and agency photographed an actor wearing the brand’s clothing with a visible logo “in several adventurous places,” such as Guarita State Park and Farol Do Mampituba in Brazil, and then switched the Wikipedia photos for the travel destinations for ones shot by The North Face and Leo Burnett Tailor Made.

“We hacked the results to reach one of the most difficult places: the top of the world’s largest search engine,” according to the video on YouTube.

Lauren Rockwell, associate director of SEO at Cogniscient Media, called the “stunt” a “PR win” for the brand. The images were removed quickly, but the “brand mentions and external links that will build from this temporary stunt are likely the reason why this campaign exists in the first place,” she said.

Rockwell believes the brand and agency knew they violated guidelines and that the images would quickly be taken down, and may not result in feeding Google Images for destination queries. “Their goal was about the exposure of the stunt vs. the stunt itself,” she said. “North Face is receiving long term impact of external links from this campaign to the site as well as short-term impact of the imagery and brand mentions on social media.”

The North Face video also touts how the brand and agency paid “absolutely nothing, just by collaborating with Wikipedia.”

The video states that the brand and agency collaborated with Wikipedia, but no such partnership was made.

Mike Dickison, a New Zealand Wikipedian at Large, tweeted in one instance of the photo swap that “the agency just photoshopped a North Face product into a nice photo they may not have taken. Who knows? Because they misled Wikipedia volunteers about what they were doing, how can we trust them?”

Dickison likes the idea of The North Face donating “nice photos” of its products to Wikipedia, but trying to “smuggle them in (violating the terms of service), then boasting about it” seems to be the problem.

MediaPost reached out to all involved and will update the article with any additional news.