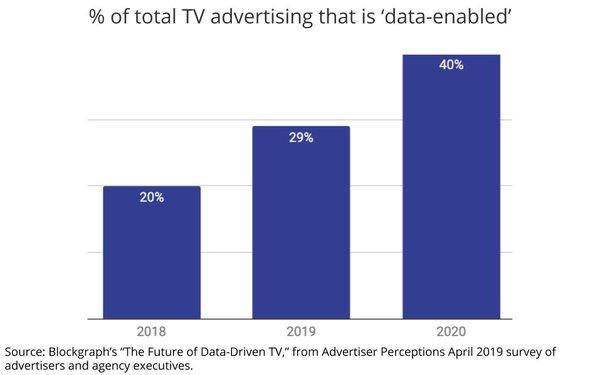 Data-enabled TV spending will see a sharp spike this year and next. But major issues remain.

In a survey by Blockgraph, an industry-wide “identity” protection effort pushed by Comcast’s Corp’s Freewheel, the percentage of data-connected TV advertising spend is estimated to grow to 29% this year, from 20% in 2018, and is forecast to rise 40% in 2020.

The findings are part of a report from research of over 150 advertisers and agencies, commissioned from Advertiser Perceptions.

However, respondents continue to note that several major barriers in using data to build audience segments for TV advertising exist: transparency issues, which tallied a 44% number from respondents; accountability/measurement, at 43%; data privacy concerns, at 42%; and data matching issues, at 42%.

Over one-third (36%) said “identity resolution” was one of the top three barriers preventing them from using data to build audience profiles. Nearly 80% said protecting consumer privacy was a top concern in 2019, up 10% over 2018.

Analysis in the report says there are “data matching” issues with media companies.

“[It] can become expensive  -- with each data match costing several thousand dollars) and can often take weeks, given the amount of multi-party involvement necessary. Further, data normalization and the lack of common unique identifiers among parties can often result in low match rates.”