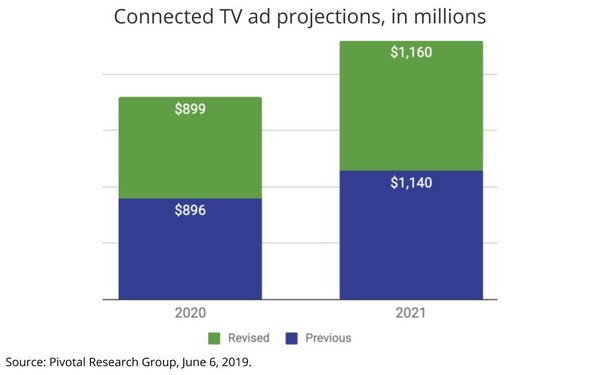 While The Trade Desk keeps up its rapid overall growth, it is now looking at more modest expectations on its automated-buying platform for connected TV (CTV) advertising revenues in the coming periods, according to one analyst.

Michael Levine, senior research analyst of Pivotal Research Group, says he is now shifting estimates -- some $25 million in revenue coming from CTV-related fees for advertising spend  -- to next year.

Still, Levine is largely positive on the company.

“Based on our data through May, we see continued share gains by [Trade Desk] relative to other DSPs [Demand Side Platforms]. We are increasingly comfortable about our above consensus 2Q19 numbers,” he says.

But there is some work to be done.

“The existing footprint and positive relationships within the agencies will be key to their success. But they also need to penetrate the TV buyers’ silo of the organization,” he adds.

These factors will determine where ad competitor Google is going -- especially from a regulatory point of view, via a possible Department of Justice overview, per news reports. On Tuesday, The Trade Desk was up 12% on this report.

At the same time, Google continues to add to its growing advertising stack of technology for marketers -- as well as strengthen its position on specific areas, like video.

For example, Levine says, “in order to buy YouTube programmatically, you need to use the [Google Display & Video 360] DV360 tool. This is one of the reasons agencies/large marketers need to work with multiple DSPs.”