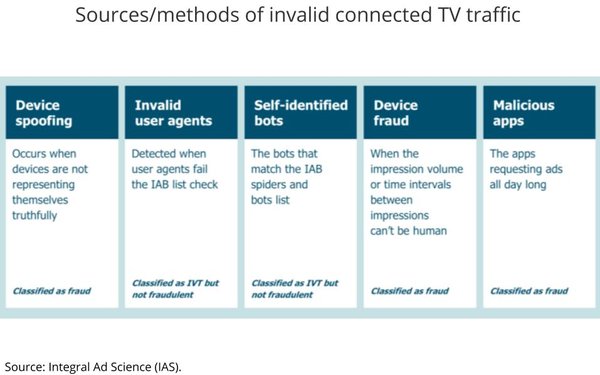 The service, which was developed in a beta for marketer Verizon, initially is tracking ad fraud across eight participating CTV ad suppliers, including CBS Interactive and NBCUniversal.

IAS did not disclose the other six participating media companies, but during a webinar on Thursday representatives said the company is focused on “working with the largest publishers directly,” and to stay tuned for additional partner announcements soon.

Initially, IAS’ CTV fraud detection service will focus only on video ads served on connected TVs, but it eventually plans to track fraudulent display advertising too.

The IAS webinar focused on educating users about the various definitions of CTV ad fraud, as well as the methods and vectors for disseminating it.

The IAS executives said they have been utilizing rigorous standards developed by the Interactive Advertising Bureau’s VAST specifications to identify “signals” that can be used to track and weed out fraudulent CTV ad delivery.