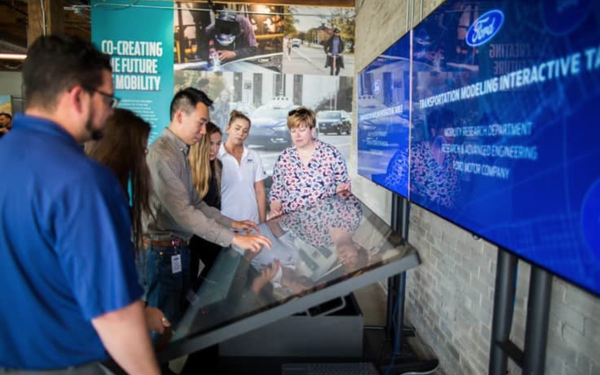 That’s not an exaggeration. The #ForDetroit campaign created around the announcement last June reached more than 541 million individuals as a result of 21,0000 social mentions.

The Snapchat filter created for the campaign received more than 89,000 views and 45% of the users who viewed the filter and used it, exceeding the brand's Snapchat filter benchmark by three times. The "Love Letter #ForDetroit" Instagram Stories series received an average completion rate of 96% and generated 6.5 million social impressions.

One year later, the automaker is deep into the building’s restoration and Ford is using the station as a way to reach out to the community. To facilitate ongoing engagement, Ford is opening an information center. Located a few blocks from the station, the space will provide the public with access to project information, construction updates and a mobility pilot program and technologies, as well as community initiatives.

The automaker already has learned a lot from local residents and businesses over the past year, Mary Culler, Detroit development director for Ford, told DriveTime. The fascination with the automaker’s decision to resurrect the once stunning, but now derelict, building has piqued interest far and wide.

Ford has a government office in California, and usually it is challenging to engage busy legislators, Culler says. “But after the announcement about the train station, they were reaching out to us, wanting to discuss the initiative and learn from it,” she says.

The new development, with Detroit’s iconic train station at its center, will bring together thousands of innovators, entrepreneurs, companies, designers, technologists and Ford employees to design and test new solutions for how people and goods move now and in the future -- connecting them with an increasingly smart world.

The train station will have room for about 2,500 Ford employees and about 2,500 employees from other companies who will become tenants in the huge building.

Ford is already working with partners to reimagine transportation on the streets around the station. In December, the company launched a pilot program using its ride-hailing service GoRide to help families pick up meals and attend appointments at local food banks.

Spin, an electric scooter startup that Ford acquired last year, has expanded its fleet of scooters in the area to make it easier for residents and visitors to get around.

Argo AI, an artificial intelligence company that is Ford’s partner for autonomous vehicle system development, began on-road testing of a Ford Fusion Hybrid self-driving vehicle in Detroit earlier this month. Similar vehicles are already deployed in Pittsburgh, Palo Alto, Miami and Washington in an effort to learn more about how autonomous technology can be used in various urban environments. Ford’s self-driving vehicle business unit, based in Detroit, has made a $1 billion investment in Argo AI.

Ford’s City:One Challenge is also launching in Detroit this month. The crowdsourcing program is designed to bring together residents, businesses and community groups to propose and pilot solutions to improve mobility for current and future residents of the Michigan Central Station development area.

As part of the project’s community benefits agreement, this month Ford awarded $250,000 in grants to four nonprofit organizations to fund programs that celebrate the area’s history and culture. Ford employee volunteers are also participating in neighborhood projects like the Clark Park cleanup and a Gleaners Community Food Bank drive at the Ford Resource and Engagement Center in Southwest Detroit.

It’s refreshing to see a company literally putting its money where its mouth is in efforts to not only rejuvenate, but continue to support, the once bankrupt city of Detroit.

Other companies and cities can definitely learn from this ongoing and inspirational relationship.