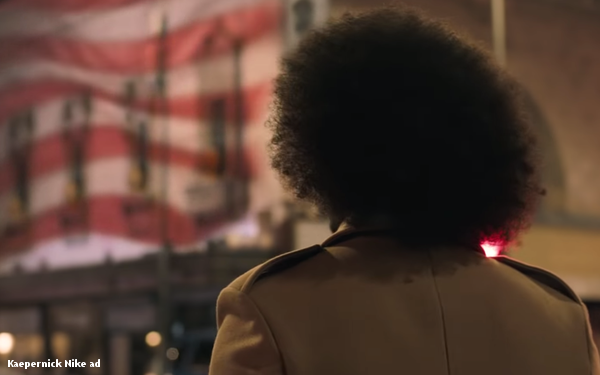 Nike has run into rough PR terrain again, upsetting activists in both the U.S. and Asia.

The Beaverton, Ore.-based company had been set to introduce a special version of its Air Max 1 for July 4, sporting a version of the American flag with 13 stars, often called the Betsy Ross flag.

The Wall Street Journal reported that Nike yanked the shoe after spokesperson Colin Kaepernick told company execs some see that flag as offensive, in part because it’s from an era of slavery.

Familiar-sounding fights then broke out on social media. Those targeting Nike on the right included conservative host Laura Ingraham, who called for a boycott based on the company’s perceived lack of patriotism for not standing by its flag design.“No more @nike sneakers for our family,” the conservative host tweeted to her 2.8 million followers. (Irony noted: Ingraham’s show has also been a boycott target, with large advertisers running for the hills after she mocked survivors of the Parkland school shootings last year.)

Sen. Ted Cruz Senator (R-TX -- remember him?) also weighed in with trademark sarcasm: “It’s a good thing @Nike only wants to sell sneakers to people who hate the American flag.”

And Arizona’s Gov. Doug Ducey (R) accused Nike of caving in "to the current onslaught of political correctness and historical revisionism" and says he wants to pull back financial incentives recently offered to Nike for building a manufacturing facility there.

Just as quickly, others rushed to Twitter to defend both Kaepernick and Nike, and make the obvious point that many on the right already vowed to shun Nike after it launched the campaign featuring Kaepernick last fall. “Democratic Twitter Today: ‘America is forcing kidnapped children to drink out of toilets!’ Republican Twitter Today: ‘Whaaaaaa! Whaaaaa! Nike isn't going to make this one shoe we were never going to buy! Whaaaaaa! Whaaaaa!’”

Others are pointing out that what to much of America looks like a traditional symbol of U.S. Revolutionary War-era history (Who doesn’t love Betsy Ross, a warrior in her own right?) has actually become a symbol of hate to some. White supremacist groups, including the Ku Klux Klan, use the 13-star flag in recruiting and membership materials.

Fast Company reports that some shoes escaped the callback, and are selling for up to $2,500 on secondary sneaker markets.

A different Nike uproar is underway in Asia, as protests in Hong Kong continue to grow. So when the designer for Undercover, a Japanese brand Nike collaborated with for a limited-edition collection, posted support for the protesters, many in China reacted strongly.

Nike halted sales of the collection. “Based on feedback from Chinese consumers, we have withdrawn from China a small number of products that were designed by a collaborator,” a Nike spokesperson told the Financial Times.

Neither move is likely to have any negative impact on sales. In fact, since launching the controversial “Dream Crazy” campaign, featuring Kaepernick, the company’s results have gotten even better, and the stock is trading at all-time highs.

But the situation in China is more fraught. “We added more than $1 billion of incremental growth in the geography this past year,” CEO Mark Parker said, in remarks prepared for its earnings conference call last week. “We are and remain a brand ‘of China, for China.’ Nike is proud of the investments we’ve made and the relationships we’ve developed in this energizing marketplace. And we’re confident that we’ll continue to grow sport and our business in China for decades to come.” (The Jordan line is particularly high performing there.)

In its just-ended fiscal year, Nike sales in Greater China hit $2.38 billion, a 31% jump from previous years. By contrast, North American sales came in at $3.92 billion, a 9% gain.

While there’s no arguing with China’s growing financial clout, protests are making it increasingly complex for brands eager to please China yet not alienate others who are in conflict with it. Last year, for example, automaker Mercedes Benz had to apologize to China after quoting the Dalai Lama in a social media post.

Even goods not sold in China are landing some brands in hot water. The Gap, for example, apologized for selling a T-shirt with a map that didn’t include Taiwan, the self-ruled island that China considers part of its territories.