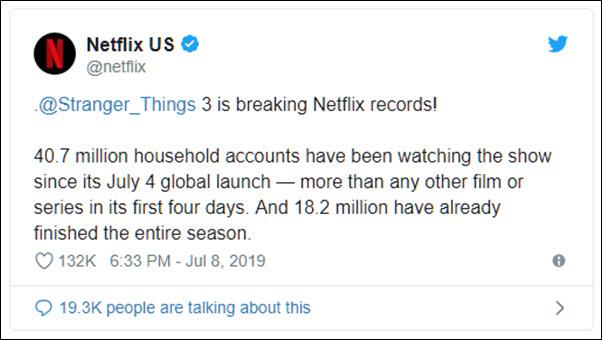 Season 3 of “Stranger Things” has been viewed by 40.7 million household accounts in the four days since its worldwide debut on July 4, according to Netflix.

That sets a record for the most-viewed program on the service within that time frame, says Netflix, which defines a “view” as someone watching at least 70% of a TV show or movie.

While Netflix’s occasional announcements about viewership are not independently verified, 40 million is an undeniably impressive number.

For some context, in their first three days of availability, “Stranger Things” Season 2 drew 15.8 million views, 2017’s Will Smith vehicle “Bright” drew more than 11 million, and the first episode of “The Crown” Season 2 drew 3 million, according to Nielsen’s estimates. (Netflix disputes Nielsen’s data and methodology for estimating Netflix audiences.)

The positive “Stranger Things” 3 performance is welcome news for Netflix, which has been getting rather negative attention of late.

There was late June’s news that Netflix will lose the streaming rights to the still extremely popular reruns of “The Office” to NBCUniversal as of 2021, sparking threats of cancellation from some Netflix subscribers. That came simultaneously with Netflix’s loss of Matt Brodlie, its director of original film, to Disney+, the competitive sub-based service set to launch in November.

With not only Disney and NBCU, but WarnerMedia and Apple, poised to debut new streaming services, Netflix’s business model is also drawing increased scrutiny and speculation.

In the last week, a report that Netflix content chief Ted Sarandos recently instituted a greater focus on acquiring new subscribers as a criterion for investing in and assessing the efficiency of new original content was followed by a CNBC.com piece highlighting some analysts’ concerns about Netflix having experienced negative cash flow since 2014.

Netflix said it hasn’t made any changes in content budgets, or the kinds of projects it is investing in, or how it greenlights them.

It has also said that projected revenues from subscriber growth will begin to reduce its negative cash flow starting next year.

But speculation that the escalating competition and costs of the content wars will force Netflix to add an advertising-supported option (still firmly denied by Netflix) has intensified. And a new study from Hub Entertainment Research found 14% of subscribers claiming that they would drop Netflix if it added advertising.

Even Netflix’s successes seem to be fodder for criticism, or at least “yeah, but…” commentary, these days.

For instance, Netflix’s tweeted announcement (above) about the performance of the new “Stranger Things” season so far noted that 18.2 million of the 40-plus million viewers have already binge-watched the entire season.

Surely a confirmation of fans’ devotion to the series, as well as a reminder of Netflix’s huge domestic and international reach.

But some question the company’s unusual decision to encourage such bingeing by releasing all of a season’s episodes at once.

“Netflix binge-releasing entire seasons of its shows creates tension between bingers and casual viewers, limiting the discussions of the shows themselves, which devalues the cultural impact of Netflix’s most popular hits such as ‘Stranger Things,’” writes Buddy Lo, a senior technology and consumer electronics analyst with Mintel.

Because those who binge have to be careful not to offend friends by being plot spoilers, Netflix is undermining the extent and longevity of its social media buzz, argues Lo.

He cites data showing that social media mentions of “Stranger Things” Season 2 “skyrocketed” in the week prior to its debut, and peaked during release week (at 2.5 million), but dropped precipitously in the following two weeks (to 1.17 million mentions).

“Traditionally scheduled programs have more sustained social media discussions during their run-time, meaning Netflix is missing out on weeks of elevated social media discussions on their popular shows” Lo sums up. “While social media mentions typically dip after a premiere for a TV show, the season finale is often more discussed than the season premiere. For ‘Stranger Things,’ the premiere and the finale are available immediately, losing the opportunity for elevated discussion during its run-time as well as the peak for the highly anticipated finale.”

No. 1 in Viewing Time Among Millennial Latinos

Similarly, a new study on the Latino media landscape from Horowitz Research finds that Netflix is No. 1 in time spent among “Latinx” millennials, pulling 34% of this segment’s streaming view time. (Latinx is a gender-neutral alternative to “Latinos.”) In addition, 38% say that Netflix is their “go to” source for streaming content.

In comparison, Amazon Prime Video and Hulu have 10% and 9% of this segment’s view time, respectively, while YouTube, network sites and apps, TV provider sites and apps claim slices of the remaining 47% of view time.

“Netflix has transformed the media landscape for Latinx millennial audiences by providing access to the innovative, culturally resonant, and differentiated content they crave — in English, in Spanish, and even bilingual — that many other mainstream media companies have been slow to lean into,” states Adriana Waterston, SVP of Insights and Strategy for Horowitz Research, in summarizing the study.

Yet, the study also underscores Netflix’s “Achilles heel”: "growing frustrations with aspects of the streaming experience for Latinx and other millennials." About four in 10 Latinx millennial streamers, it finds, "feel that the ‘amount of content available today is overwhelming’ and are finding it ‘harder and harder to find new shows to watch’ — suggesting continued demand for managed entertainment services that offer the aggregated content discovery and browsing experience that cable and satellite providers offer, but in the streamed environment.”

Four in 10 Latinx millennial streamers also say that they're finding it “more difficult now to talk about TV shows with other people” since people are watching on-demand.

“Most critically for Netflix, the value of the service is substantially bolstered by the vast library of syndicated, network content the service offers" — and not just among millennial Latinx, stresses Horowitz.

In the study, 45% of Latinx millennial Netflix users and 52% of non-Hispanic millennial users agreed that if NBC, Fox, AMC and other major networks pulled their content from Netflix, they would consider cancelling their subscriptions.

“As more media companies…launch their own streaming experiences and withhold their content from Netflix, it remains to be seen whether Netflix can continue to differentiate through its original content to retain Latinx and other millennial audiences,” sums up the study.