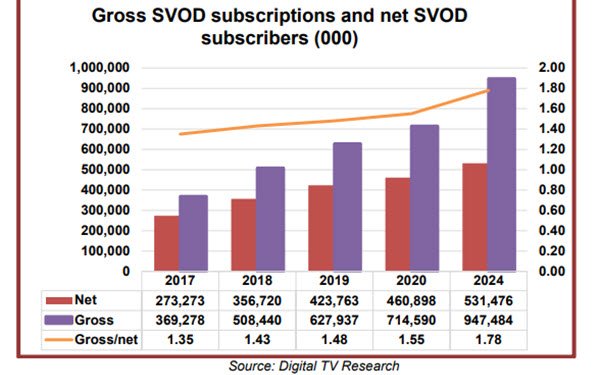 The net subscriber count will rise by 175 million, to 531.5 million, during the same period.

China surpassed the United States last year as the gross subscription leader, and the two countries will account for 59% of the global count by 2024, reports the researcher’s principal analyst, Simon Murray. However, that’s down from 63% in 2018, indicating that other countries are growing faster, he adds.

Fifteen countries will account for more than 10 million subscriptions, or 86% of the total, by 2024.

That’s partly because subscriber growth is mainly in developing countries where average-revenue-per-subscriber is lower than in developed countries, explains Murray. In addition, subscriptions are moving away from stand-alone packages to double- and triple-play bundles, which are less lucrative for the TV industry, he says.

However, global OTT revenues — online TV episode and movie revenues — will reach $159 billion by 2024, which is more than double 2018's $68 billion. These revenues will grow by some $17 billion this year alone.

But despite losing market share to SVOD, "there is still plenty of AVOD growth left," and several high-profile AVOD platforms are poised to launch soon, Murray points out. The researcher projects that AVOD revenues will increase by $34 billion, to $56 billion, between 2018 and 2024.