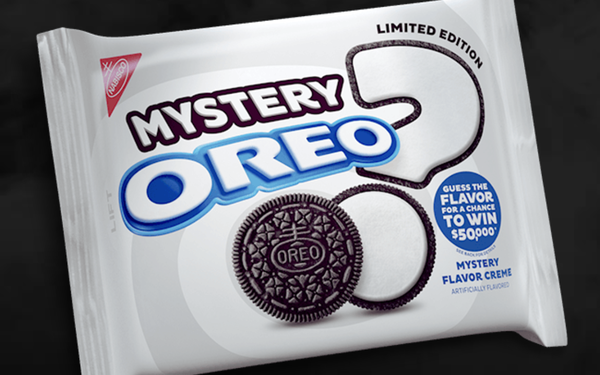 Mondelez is using celebrities, social media incentives and the Alexa cloud-based voice service to keep people guessing about the latest flavor inside black-and-white Oreo cookies. It’s all part of a two-month-long campaign, “Mystery Oreo,” that ends in November with a $50,000 grand prize.

Packages of limited-edition Mystery Oreo hit store shelves a week ago with packaging that encouraged people to identify the new flavor. Actors Gaten Matarazzo (“Stranger Things”), Terry Crews (“Brooklyn Nine-Nine”)  and Aja Naomi King (“How to Get Away With Murder”) have taken to social media with video depictions of their own taste-and-guess efforts.

The campaign is the first time that consumers can interact with the Oreo brand via Alexa-enabled devices, to receive weekly flavor clues for the contest -- and, when prompted, order the cookies via Amazon. The company says there will be “many more announcements to come in the future” about new flavor launches and Oreo innovations via the Alexa technology with the query, “Alexa, what’s new with Oreo?”

Contest entries -- limited to one per day -- can be made at MysteryOREO.com, and those that correctly identify the new flavor will be eligible for the $50,000 grand prize, which will be randomly drawn on or about Nov. 19. Mail-in entries are eligible for the grand prize even if they are incorrect, the rationale being that the mail-in option gives all consumers an equal shot of winning, regardless of whether they have tried the flavor by purchasing the product.

People who enter the contest on the Mystery site are incentivized to win bonus sweepstakes entries by sharing a message about it on their Facebook wall or tweeting about it on Twitter. The posts and tweets contain links to the promotion and, if used by friends to enter the contest, generate the bonus entries.

"At Oreo, we love being playful with our fans and are thrilled to see that they are already tapping into that playful spirit and using their sleuthing skills to uncover the new mystery flavor,” Danielle Freid, Mondelez brand manager, tells Marketing Daily.