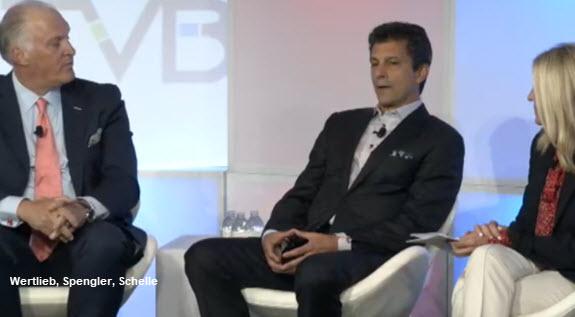 While there’s a lot of debate about speed of adoption by the industry and consumers, advertiser cost-efficiency and other challenges, it’s clear that various forms of advanced TV will become a bigger part of the business models of traditional local television broadcasters in the next several years.

But at this week’s TVB Forward conference, there was a sensible emphasis on first things first. Two building blocks for growing traditional revenue channels, as well as ATV, dominated: the need to keep revving up the transition to transacting advertising using impressions, rather than GRP-based ratings; and the need to get the full industry on board as quickly as possible with the new ATSC 3.0 broadcasting standard.

The speakers all agreed that impression-based advertising trading (which doesn’t mean abandoning ratings for other purposes, they stressed) is critical to the industry for several reasons that should be well-known and undisputed at this point.

I’ll elaborate on the speakers’ insights in this area in future columns and Digital News Daily coverage. For now, suffice it to say that until the transition to impressions for ad transactions is made, local TV broadcasters are at a disadvantage even in the current trading environment, because their audiences are being undercounted, and the difficulties involved in inconsistent currencies put them at disadvantage in cross-media deals.

Meanwhile, the ATSC 3.0 standard is set to be in place in the top 40 U.S. TV markets by the end of 2020 — at which point, television sets and devices featuring the high-tech features enabled by the standard (now branded “NextGen TV for consumer-facing purposes) should also be starting to roll out.

But how much will all of this — and other shifting dynamics — change  the scenario between now and 2025?

How much will scale matter?

Jordan Wertlieb, president of Hearst Television, said he believes that local broadcasters that can offer more than television alone, and so enhance their ability to help advertisers follow prospects through the full customer journey, will be at advantage.

Tim Spengler, President, M1, Dentsu Aegis Network Americas, said that while it could be of value if more stations mean more and better data to make advertising buys, “what’s more important is having data-led, tech-enabled opportunities and the ability to have multimedia at our fingertips, so our local people can be experts in all media within a market.”

Asked about the privacy implications of ATV (aka next-gen TV), Pearl TV Managing Director Anne Schelle noted that “the media industry is obviously moving to a direct-to-consumer model, and ATSC 3.0 is just that. For the first time, local TV broadcasters can have actual direct relationships with the viewer." The good news is more data for the broadcasters and their advertising efforts, as well as enabling a modernized, customized viewing experience for consumers, she said.

But TV operators are “going to have to get comfortable with that new direct relationship — actually knowing what consumers are viewing on a device,” she added. “Local media are the most trusted, and with that trust could come privacy issues. We’re coming into the market with this D2C platform just as consumers become more aware of privacy considerations. But because we’re building it from a privacy-by-design perspective, I think we can maintain that trusted environment for our consumer.”

How else will tech change the industry?

Wertlieb said the ability to use automation to reduce or eliminate salespeoples’ time on non-sales work like reconciliations will enable more time for working with customers and partners on marketing solutions. He added that data analytics and understanding of multiple platforms will become critical skillsets for sellers.

Spengler believes the sell-side team will be bifurcated, with a mix of data science and planner/buyers on one side, and “persuasion-oriented, grassroots” experts handling events, sponsorships and other activations on the other side. Fewer but highly skilled people will be needed on the data side once automation is in full swing, he said.

Perhaps most intriguing, these executives believe that, if local television can get on par with its buying currency and take its audience targeting capabilities to more sophisticated levels — audience segments and ultimately, identity-based targeting — the business can begin to win back advertising share siphoned off by the big social media platforms.

“I think that when you can have the conversation on Day One around audiences and attribution, you have the opportunity to take money back from Facebook -- all of that local money that went to social,” declared Spengler. “When you know your customers better, you’ll have the opportunity to talk to any advertisers out there who currently know more about their customers than you do — mom and pops, video game marketers, legal gambling operations, anything B2C. Because they like broadcast and they want to use it — it just needs to be more precise.

”If you can be precise about your audiences with no fraud, you start with a 30% to 40% leg up before you even see how any impressions actually performed versus digital and the environment.”

Wertlieb agreed. Citing that high consumer trust factor, he said that marketers are “rooting" for local broadcasters. "Given the choice of a local newscast or sportscast versus having a scroll on Facebook, they’ll run to broadcast," he said. "But we don’t have the same attribution capabilities. If we get those, that 40% [of ad spending siphoned off by digital rivals] naturally comes back.”

“And we’re talking about viewers,” he added. “There are no bots in television. That’s a huge differentiator. We’ve just got to move on the technology.”

While Wertlieb is confident that ATSC 3.0 will give local TV “a big leg up" in serving "multiple buckets of advertisers,” he doesn’t believe that addressable advertising will replace “the current ecosystem."

“I think that for most marketers, massive simultaneous reach of live, socially oriented audiences is a great value proposition,” he said. “They may want a little better targeting, but I don’t see someone saying, ‘Let’s chop the audience down to one-tenth of what you’re currently delivering.’ I think what they’re saying is, ‘I love your audience. Can I message in 10 different ways?’ Let’s not forget that it’s really hard to find a large audience at the same time of day every day. That’s our value proposition.”