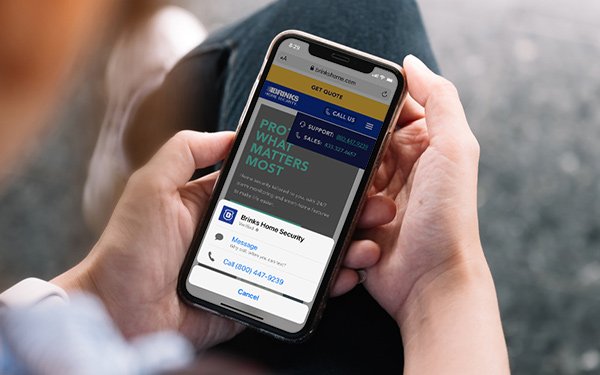 Brinks Home Security has introduced a feature made possible by an update in Apple’s latest operating system, iOS 13. It gives consumers the option to chat with the business after clicking on a phone number in Google Search results. In fact any search results that leads the site visitor to the page. The business must be enrolled in Apple Business Chat.

Brinks uses the chat feature with Google, but the feature isn't based in the URL. It is deep within the iOS 13 operating system. This means it can be used with any phone, regardless of the search engine that leads the user to the web site, as long as it runs on iOS 13.

It’s the action of tapping the registered phone number brings up the chat.

The phone number could be produced in a search result or when someone taps on a phone number from Brinks' web page.

“A lot of this is being driven by the consumer because people are looking for alternative channels to interact with businesses other than phone calls, which was the impetus for this,” said Jay Autrey, chief customer officer at Brinks Home Security.

Quiq, which supports live chat and text messaging, enables Brinks to offer the service to its customers who use an iPhone. Getting 50% of Brinks customers to use chat rather than a phone call will become “a significant saving,” he said.

Brinks, which has a new self-service installation offering, also will text a consumer a video on how to install the service once they know it has been delivered.

The service does not integrate with alarm monitoring yet, but in the future it will become possible for the alarm monitoring service to alert an emergency contact list, which typically includes several people, through a text in the event of a break-in or false alarm.

“That’s the missing piece in the industry,” he said. “It’s really one-on-one now and it doesn’t help if I’m out of town and get a text and can’t respond.”

It’s better to know that a group gets the alert in case it is a valid alarm.

Google also is moving in the direction of allowing Android users to chat with a business from search, rather than call, if they choose.

Autrey said within the next 60 days Brinks, formerly Monotronics, also will launch a way for customers to make a referral online through a text.