'Feed' Your Head: In Amazon Drama, All Media Is In Our Brains 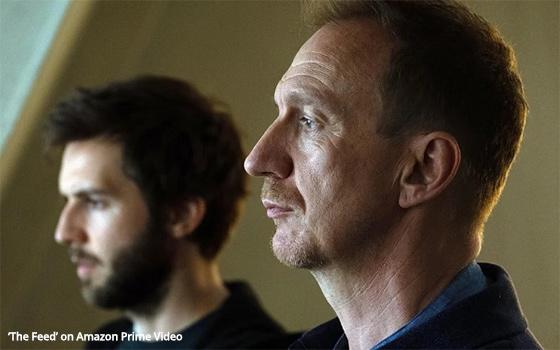 Amazon’s new series “The Feed,” premiering Friday on Prime Video, is a cautionary tale about what can happen when most of the inhabitants of the planet are obsessed to the point of addiction with consuming all of the online content that rushes in on them more or less continuously.

If you read that sentence and felt it referred to the very situation the planet and its population are in right now, then you would be partly right. It is true that many of us are glued to our devices in an addictive way at the present time.

But “The Feed” takes this addiction a step further. It presents a post-device world in which a continuous “feed” of images from both the outer world and our personal lives -- including memories that recur to us as actual video of all the events in our lives -- are accessible to everyone via a chip (or possibly some sort of micro-transponder) implanted in their brains.

The cascading, colliding images then appear to us in the thin air swimming before our eyes and visible only to us, without the use of any device at all -- no smartphone, laptop, tablet or VR goggles.

In the show, The Feed is positioned as the most prevalent form of social media on the planet. Everyone has access to it, and it has become the way people communicate with each other -- via a kind of internet-based telepathy where you can interact with another person's brain and simply ask them silently to turn on their feed in order to communicate with you.

In the world depicted in “The Feed” -- specifically London in the “near future” -- this technology in which social media, news, entertainment and all of the images of every event in our lives converge in one brain-based app (so to speak) has created a culture in which many are hopelessly addicted and cut off from reality.

And then, as you might imagine in a TV show like this one, the entire system becomes beset with malware that makes the craziest of the feed's users even crazier, and even homicidal.

In Episode One, we are introduced to an English family named Hatfield whose patriarch (played by David Thewlis -- above photo, right) invented the feed technology. As a result, the family has become so famous they are treated like British royalty by the world's media.

When unknown hackers (not identified as McCoys in Episode One) begin to bedevil these Hatfields by wreaking havoc on this carefully constructed system, then you can imagine the consequences -- mass chaos.

TV series (and probably a number of movies too) have been made recently about the potential dangers lurking inside our technological world and just waiting to explode.

Like the rest, “The Feed” is about what happens when the technology we devise becomes so sophisticated and interconnected that these systems require just one false move or errant hack to have the entire thing collapse in on itself.

In the real world, we are always being warned that one well-conceived hack attack could, say, disable our entire national power grid, for example, plunging the nation into chaos in one fell swoop