What's Red & Blue And A Toss-Up All Over: Bloomberg's Political Media Spending 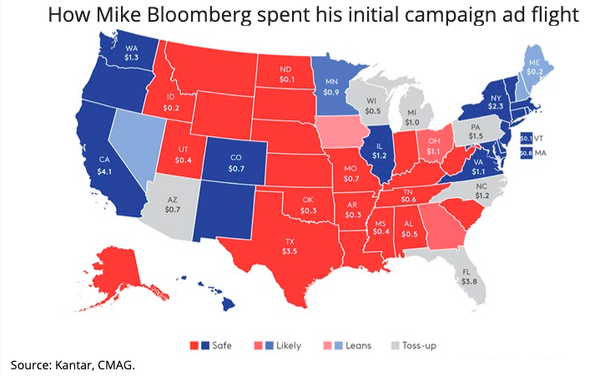 Mike Bloomberg's initial flight of paid political advertising buys backing his Presidential bid have been delineated by Kantar and its CMAG unit as a map of the U.S. showing breakdowns by political party propensity, as well as toss-ups.

Excluding national network spots, which account for $7.6 million of Bloomberg's ad bookings, he appears to be concentrating the majority of his initial campaign budget in Democratic states, allocating 43% of spend ($12.7 million) targeting the voters he may have an easier time winning over. The remainder of his money was split among Republican (30%) and toss-up states (27%).

Coincidentally, the Democratic-leaning states also happen to be among the biggest media markets, so there likely was some secondary benefit from running ads in those markets vis a vis earned media coverage.

To get a snapshot of Kantar's overall view of the 2020 race, download this report.