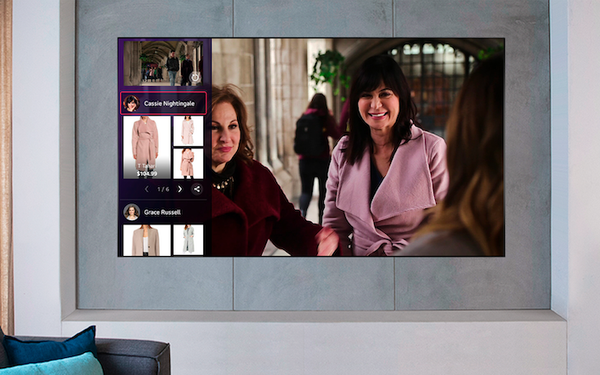 As it happens, this time I can offer a look at a brand-new initiative: what is said to be the first shoppable integration by a major television maker, with several big media companies also already on board.

The technology will be rolled out on the participants’ various networks during the course of this year. TheTake says it has also struck a deal with “a large U.S. MVPD” to roll the tech out across millions of set-top boxes later in 2020.

Starting in the spring, when the new TVs come to market, owners will be able to hit a button indicating that they want to be able to shop products in the show. Available items are highlighted as the show or movie rolls, via on-screen sidebars featuring visuals and more information.

When they want to shop an item, viewers tap in their mobile numbers (which are saved on the TV for future use), and receive links to retailers through whom they can purchase the merchandise on their phones.

TheTake’s AI-based technology can identify hundreds of millions of products and match them to thousands of retail partners, the company’s CEO, Ty Cooper, tells Video Insider.

That means that more than 500 products may be tagged as purchasable in any given show episode, and thousands may be tagged within a movie. The types of products available run the gamut, including homeware, tech devices and even recipe ingredients — but fashion and accessories seem to be a key focus.

How does this compare with other shoppable TV capabilities already out there — like the on-screen QR code method already being tested by NBCU?

“While previous attempts at shoppable TV have focused on pushing one or two products per episode to viewers via pop-up notifications and QR codes, our solution is fundamentally different in that we let the viewer decide when and what they want to shop,” says Cooper. “This means we make hundreds of products shoppable in a single episode of television and give viewers the ability to identify whatever specific item inspires them the moment it appears on screen."

Does this mean that producers and creative talent are now going to be routinely asked to integrate shoppable items into new shows or even movies?

"They can if they want to, but they don't need to,” says Cooper, since the turnkey solution is already capable of identifying all those millions of products and matching them to retailers without any prior coordination with the studio or network.

“However, if a studio wants to give premium placement to a brand or retailer as part of an ad buy or product placement deal, we can work with them to grant their clients exclusivity or premium placement within the experience," he explains.

While the concept of shoppable television isn’t new, this integration delivers the experience in “a simple, seamless way” that will let WarnerMedia offer viewers “a range of options to find the latest fashion statements” from its talent, said Larry Allen, vice president of ad product strategy, in the announcement.

What benefits are being highlighted in pitching the system?

“We go beyond reach and impressions to provide detailed conversion metrics to our brand and retail partners so that they can meet their specific ROI goals," says Cooper.

TheTake has previously done integrations of shoppable tech on digital properties owned by networks including Bravo, Hallmark Channel and Golf Channel. Those generated high engagement and click-through rates on products “high above industry standards,” according to the company.