Why I Don't Miss Fakebook, Er, I Mean Facebook 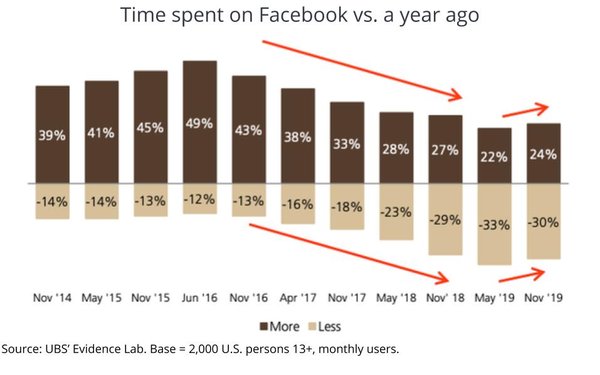 It’s been nearly two years since I deactivated Facebook and I don’t miss it. Professionally, I can’t get away from it. Societally, I think we’d all be better off without it. I’m not alone.

New research released this week by Wall Street securities firm UBS indicates that Facebook continues to be among the digital platforms Americans are most likely to “delete” (26% of consumers surveyed said they are likely to do so), and the margin of Americans who say they are spending less time on the social network is expanding vs. those who say they are spending more time on it.

It is the third consecutive year UBS has found this kind of erosion in time spent among Facebook users.

The erosion has been attributed mainly to negative press coverage about how it handles users’ data, but I think at least part of it has to be concerns about the toxicity the social network has been contributing to society, and its reluctance to do anything about it.

Take a couple of actions -- or as they case may be, inactions -- it took this week.

First Facebook announced it was taking steps to remove deepfake videos from its platform, but said it would continue to allow so-called “cheapfake” videos to pass through without offering any explanation about how it would discern where that line would be drawn.

And this morning Politico reported that Facebook bowed to pressure from the Trump Pence reelection campaign to maintain its policy of letting false and misleading political ads run on its platform.

These actions and/or inactions coming on the heels of Facebook’s negligence concerning its users' data, as well as the irresponsible way it allows hate speech and disinformation to spread, is the main reason I’m no longer on it.

I don’t miss it. And except for trolls, bots, purveyors of disinformation and hate, I don’t know why anyone else would either.