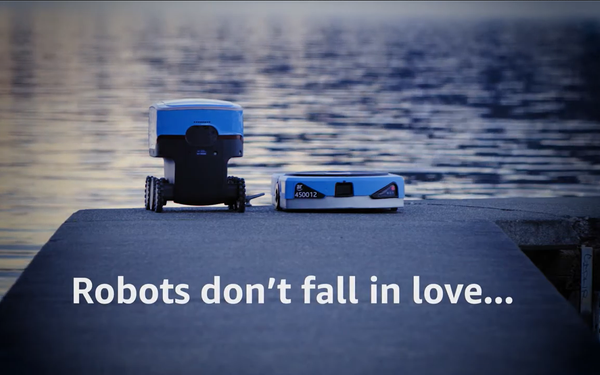 With Valentine's Day quickly approaching, Amazon in its latest promotional video celebrates the people (and machines) who work in its buildings, from distribution to warehouses.

The video will run on Amazon.com, its blog and across other online locations.

Many corporate organizations frown on inter-company romances -- but not Amazon.

The video celebrates Amazon employees and features some of the couples who have found love while working in Amazon fulfillment centers, logistics facilities, and customer service centers.

Amazon also tells the story of a romance between Amazon Scout delivery device and an Amazon Robotics device. The relationship of the two robots develops over classic first-date scenarios such as a spaghetti dinner, a night out at the movies, and walks in the park.

A love letter delivered at Amazon brought Adrianna and Diego together. Both work at the Tilbury, U.K. Amazon fulfillment center.

Diego saw Adrianna for the first time during his interview for a Safety Manager position in Daventry, U.K. While in the lunchroom taking a break from the job interview, Adrianna walked in and Diego was immediately captivated by her smile but had no chance to talk to her. Several months after he began to work at Amazon in October 2017, he summoned the courage to write her a letter to ask her on their first date.

There are eight other similar stories of love told on Amazon’s latest Dayone blog, describing how Amazon employees found love in locations ranging from Euclid, Ohio to Coventry, U.K.