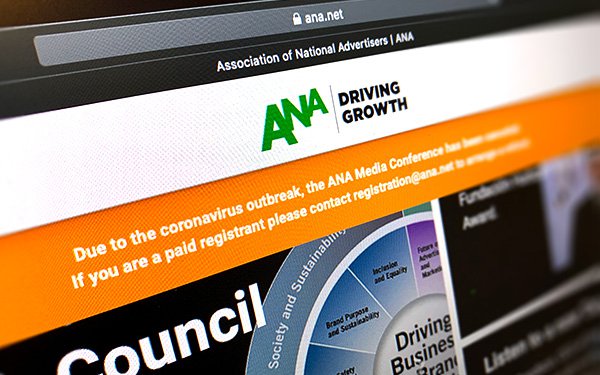 The ANA has cancelled its annual media conference that had been scheduled for Miami March 25-27 due to the Covid-19 pandemic.

The cancellation is the latest in a series of national and global gatherings and events to be cancelled, postponed or altered as a result of the crisis.

In the past 24 hours alone, the NBA has postponed its ongoing season, the NCAA has indicated its annual basketball tournament will be played without spectators and President Trump has restricted travel to Europe.

A number of TV upfronts and other gatherings have been cancelled or moved to a digital streaming format. Cannes Lions has secured alternative dates in October for the Festival of Creativity although the event is still scheduled for June.

Many companies in the marketing and other industries are restricting unnecessary travel, which in many cases includes trade conferences and events.

The 4As continues to evaluate the timing of its Decisions 2020 conference, although at deadline it was still scheduled for April 20-21.

The ANA put a notice on its website about the cancellation of its media conference, and issued a short statement.

"The decision was based on the ANA’s desire to maintain the safety and well-being of our conference attendees, members, speakers, sponsors and staff, which is of paramount importance to the Association.

The status of future ANA events and conferences will be reviewed and evaluated on a case-by-case basis and any postponements or cancellations will be announced accordingly."