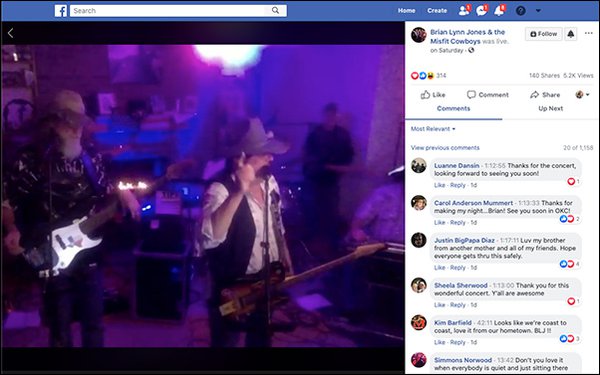 Brian Lynn Jones & the Misfit Cowboys, a country band from Texas, took to Facebook on Saturday night to stream more than an hour of live music from the home of the bass player, Tommy Dean.

Dean got the idea long before the COVID-19 outbreak, but it never came to fruition — not until last week when the band’s Friday and Saturday night gigs were cancelled. Then the idea resurfaced. Drummer Jason Harrison Smith, and the rest of the band — Bob Ogle, Mike Stevens, and Michael Pollard — were all on board.

“Tommy, Jason and Bob are pretty tech-savvy and that helped tremendously for sound and visuals,” said lead singer Brian Lynn Jones. “I did what I could to promote the event on social media and other places, all the while biting my nails, being a nervous wreck.”

The band — which typically plays at venues such as Billy Bob’s in Fort Worth, Texas; Cowboy Country in Long Beach, California; and Gilley’s in Las Vegas — had 72 hours to pull off the Facebook live stream.

The stream during the event had 2,300 views for a total of 5.300 views, 1,300 comments and 140 shares as of Sunday night. The comments and music continued to roll long after the live portion of the entertainment ended.

“We certainly didn't have a clue how it would turn out,” Jones said, noting that failure isn’t an option.

Jones, who was born in Oklahoma, says the band got together to bring a little entertainment to those quarantined at home while practicing social distancing as a result of COVID-19. He and the misfits performed the show for free, asking only for donations through a variety of online payment systems. “It doesn’t hurt to have a little extra money, but you never know when you’ll need to pay $10 for a roll of toilet paper,” he said during the performance.

For Jones and the Misfit Cowboys, the goal each Saturday night until bookings resume means entertaining the world through a Facebook live stream.

“It was a blast because we entertained people in this time of corona and quarantine boredom, and made a little money to keep us all afloat with regular life,” he said.

Others also took to Facebook during the weekend to provide relief.

Joel Kirouac, a registered nurse at UCI Health in Orange County, California, used Facebook Live to educate the public on hospital and health procedures around COVID-19. He said the virus attacks the lungs, kills lung tissue and prevents organs from gaining oxygen, and is spread by people coughing in their hand and touching gas pumps, the buttons on an ATM machine, and the counter in a restaurant.

Kirouac, a surfer in Huntington Beach, California, also has a lung injury, but he's on the front lines helping others. He asked the community whether they have extra masks and cleaning materials to donate to their local hospital.

Facebook is not the only tool that people now use in order to socialize or conduct business. Zoom has become a popular tool that allows reps at advertising and search agencies like Cogniscient Media, and Conductor, respectively, to bond with clients and fellow employees by getting an inside glimpse of their private lives as most of the U.S. works from home.

Microsoft Head of Evangelism Christi Olson held the company’s monthly meeting with search agencies on Microsoft Teams. In the background, those participating on the call could see her baby girl crawl across the carpet from behind the couch and out of view.

COVID-19 challenges remote networking as virtual events replace in-person road shows and conferences. Amazon, AT&T, Cisco, IBM, Google, Amazon, and others are working to securely support the rise in teleworkers that is putting stress on bandwidth and the network. VPN use during the past couple of week in the U.S. has risen by 53% and 112% in Italy.

Sharat Sharan, CEO at ON24, isn’t concerned with overwhelming the company’s technology as use increases, but it does continually takes steps to increase capacity as more companies rely on bandwidth to reach consumers and clients in a stay-at-home world.

“Some of the increase is not much different from what we saw after September 11,” he said. “It’s just that the world has gone more virtual. Also this is not just a U.S. phenomena, it’s global, and the end is a little less indeterminate.”

ON24, which powers interactive webinars, has seen direct website traffic in the past two weeks rise by more than 50%. The company supported more than 100,000 live events on its platform. This year, Sharan said, the company expects to double that.

The company now supports about 2,500 customers, who are generally skewed toward enterprises and global companies in financial services, technology, life sciences, professional services, and manufacturing.

Businesses will now think more about virtual strategies, he said. They will keep live events, but will also find ways to stay connected with consumers virtually.