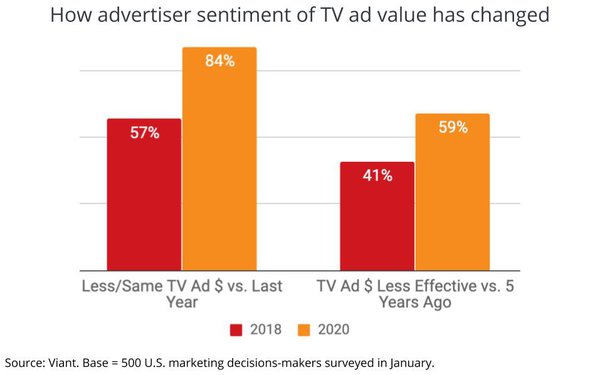 In the period prior to the impact of the pandemic on the U.S. advertising marketplace, advertiser sentiment about TV's relative value had already been eroding, according to a study released today by ad technology firm Viant.

The study, which is based on a survey of 500 U.S. marketing "decision-makers" conducted in January by Censuswide, found a marked decline in planned TV ad spending as well as perceptions of TV advertising effectiveness currently vs. a similar study conducted in 2018.

The percentage of marketers stating they were planning to spend the same or less on linear TV in the upcoming year rose to 84% in 2020 vs. 57% in 2018.

The percentage of marketers who said they believe their TV ad spending is less effective than it was five years ago rose to 59% in 2020 vs. 41% in 2018.

While the study did not explicitly address the effects of the pandemic on advertiser sentiment or consumer viewing patterns, Viant executives are using it to make the case that it is driving advertisers to view "traditional TV" within more of an "omnichannel" context.

The study also asked this year's sample whether they believed there should be one "single currency" for all omnichannel measurement -- something a number of industry bodies have been working toward -- but a majority (57%) said they have no preference, while a third (34%) said they agreed somewhat or strongly. 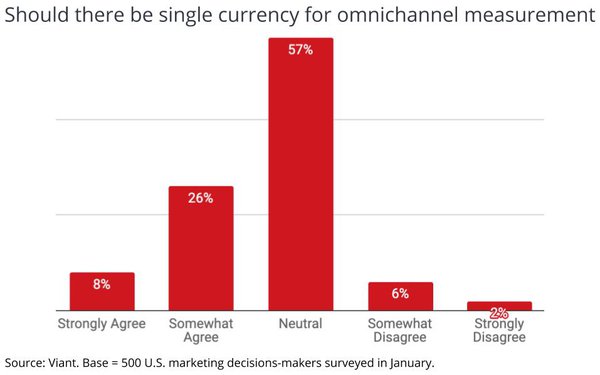