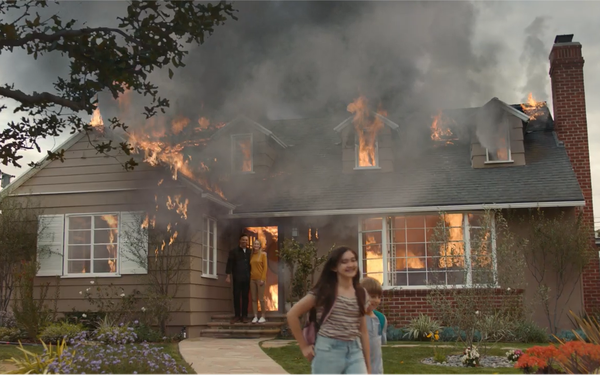 Although this year’s Earth Day falls in the middle of the global COVID-19 virus outbreak, two groups are hoping people pay attention to the ongoing problems of climate change and global warming by releasing Earth Day-themed projects.

The nonprofit Fridays For Future and agency Fred & Farid Los Angeles are launching a PSA inspired by Fridays founder Greta Thunberg's call to action at the World Economic Forum last year. She stated then, "I want you to act as if our house is on fire. Because it is.”

The creative visually transforms this proclamation by portraying a family in their morning routine acting as if everything was normal, despite fires burning all around their house.

The spot — complete with actors and expensive special effects — was fortunately filmed in mid-February in Los Angeles before the crisis forced production shutdowns. The post-production was finished during the pandemic which forced everyone to work remotely and under a hard deadline since Earth Day cannot be postponed. The agency’s array of agency partners, including director Andrew Bruntel, production shop Ways & Means, editor Exile, special effects firm Method Studios and color specialist Company 3 were able to coordinate in order to get it done on time.

The campaign will be pushed worldwide by Fridays for Future as well as other advocacy partners and influencers to amplify its visibility.

The Change Collective will work with brands in two ways. First, they will consult with brands in the early stages to co-create products, provide feedback on planned projects, and ensure authenticity and connectedness to their target audiences. Second, they will create and promote content and purpose-led messaging for campaigns.

This new match-making service kicks off with a pro bono campaign featuring the Collective’s talent roster, all posting throughout the week to raise awareness of climate change, as well as what individual actions people can take to reduce their own impact.