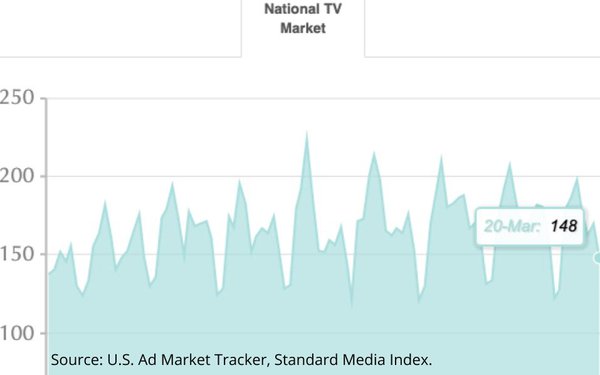 National TV took an expected major decline in March -- down 12.8% to $3.8 billion, with the first quarter of 2020 sinking 5.4% to $10.8 million, according to Standard Media Index -- due to COVID-19 issues that forced major cancellations from TV marketers.

The scrubbing of the NCAA Men’s Basketball Tournament was a major reason for the March decline. A year ago, the big event pulled in $648 million collectively on broadcast network CBS and cable TV network group Turner.

This pushed CBS advertising revenues down by a massive 48% to $283.6 million.

NBC was down 7.6% to $317.8 million for the month -- remaining the top broadcast network overall.

But not all broadcast networks were lower: ABC and Fox witnessed advertising revenues up compared to the same month a year before -- 2.6% (to $271.4 million) and 3.7% to ($112.4 million) respectively.

Looking at cable TV networks for March, ESPN -- even without live sports (especially the NBA) -- was up 2.7% to $166 million, leading all cable networks.

Still, there was good news for another Turner network --CNN’s ad revenue was 18.7% higher, reaching nearly $72 million (seventh place). CNN has seen a massive spike in viewership -- some of the highest-percentage viewing gains for any network.

The biggest non-sports, non-news channel was Discovery’s HGTV dropping 5.9%, with just under $100 million. It remained in second place among all cable TV networks after ESPN.

Much of the changes in national TV market took place in the last three weeks of March.

Even without the NCAA Tournament, CBS remained the top broadcast network for national TV advertising -- up 3.2% to $478.9 million in ad revenue.

CBS was the only broadcast network to see gains for the entire first quarter. A major element of those higher results was overall higher political advertising for all of TV in the first three months of the year.

SMI primary data comes from the raw invoices of media agency holding groups -- five of the top seven groups, making up 70% of the national TV market. SMI’s AccuTV product models 100% of commercials in the TV marketplace across more than 125 networks.