What Video Advertisers Can Learn From Colonoscopies

The variety of creative opportunities within video advertising have led many marketers in recent years to take advantage of the format.

The versatility of video ads plays an important role in enhancing a brands’ overall storytelling, in turn helping to gain more traction with consumers who are increasingly viewing video content online via their mobile devices, desktops or connected TVs.

Amid the COVID-19 pandemic, many marketers are now under increasing pressure to make their budgets count. Marketers today are committing a lot of time and expense to creating clever, high-quality video content, but some are unaware of the exact impact they are having on their viewers.

In fact, separate research from Nielsen and Kate Newstead and Jenni Romaniuk reveals that between 75% and 84% of advertising cannot be correctly recognised or recalled, while it is also likely that many consumers are forgetting having ever seen the content.

However, there are ways that brands can enhance their memorability -- without needing to coax a gorilla into playing the drums in time to a popular Phil Collins track. Research suggests that advertisers can make their ads more memorable by leveraging a mental shortcut known as the "Peak-End Rule."

Coined by the Nobel Prize-winning behavioural psychologist Daniel Kahneman, the theory behind the Peak-End Rule is that people judge experiences -- whether they’re positive or negative -- based on how they felt during an experience’s "peak’"and at its end, rather than the experience as a whole.

It was first tested by Kahneman via two groups of colonoscopy patients, the first undertaking the procedure for a standard amount of time, and the second, for a slightly longer period, in which the final few minutes were less painful.

The study found those who experienced the longer procedure rated it as less unpleasant than the group who experienced the shorter procedure. This contributed to a more positive overall impression of the experience. For marketers, the key learning from this is that individual people remember moments chiefly by the level of emotional intensity felt at the time, and this memory bias can change how we behave.

You can test how this applies by exposing volunteers to three types of video advertisement --  those without emotional peaks, those with multiple peaks throughout, and those where the highest peak occurred at the end. When you show a series of frames from each video a week later, you can measure brand recognition and recall.

The result is significantly higher recognition for videos that featured an emotional peak either in the middle or at the end, increasing by 35% and 43%, respectively. The ads that produced moments of higher emotional intensity also increased the chances of brand recall by over 100% (10% vs 21%) and was particularly effective if the brand itself was present during those moments of emotional intensity.

The Peak End Rule can be just as effective on short ads as those that are 30 seconds long, as even for those that are one to two minutes in length. The most important aspect of the video ad must be that it features a "peak" moment of emotion, this in turn will increase the chances of it being remembered. 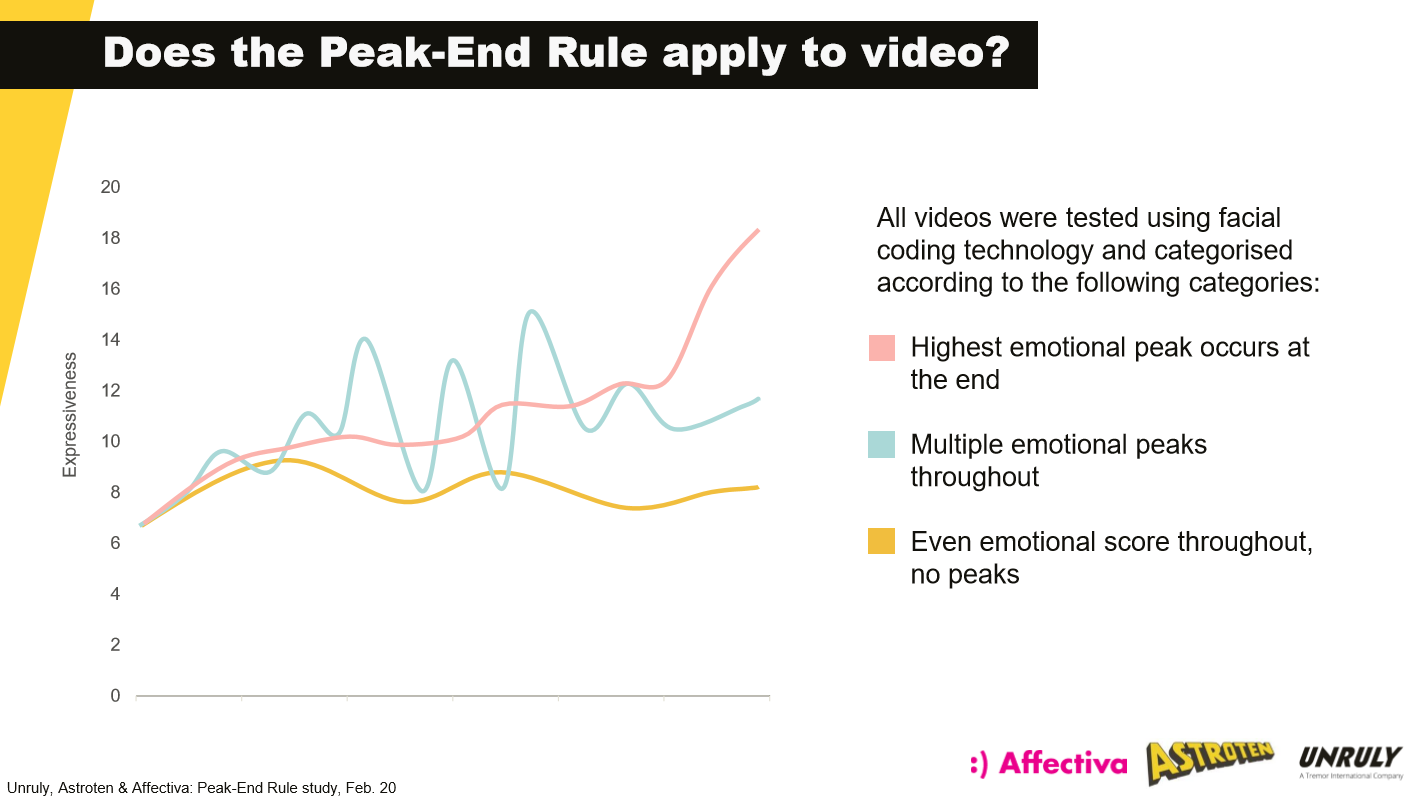 It’s important to note that video ads that do not produce a "peak" moment in emotion should not be cast aside as ineffective.

However, with more brands looking to invest in video advertising, the chances of getting cut-through and standing out among the competition can become more difficult. Brands can therefore improve their chances of creating something memorable by shaping their video content to truly engage with peaks in our emotions.

This will in turn build a stronger brand image -- and a video ad we will all remember.

Who knew there was much to learn in advertising from colonoscopy experiments?