40% Of Global SVOD Subscriptions To Come Via Smartphones By 2025 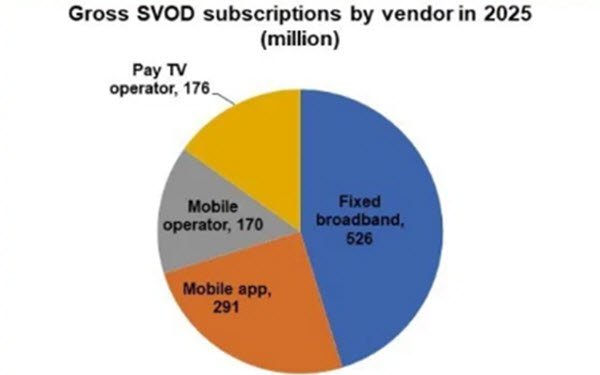 That’s a global projection from Digital TV Research, which sees mobile taking on an increasing role in driving subscription-based video-on-demand customer growth as other platforms reach their rapid-growth limitations.

Total global SVOD subscriptions will reach 1.16 billion by 2025, up from 642 million in 2019, the researcher projects in an SVOD forecasts-by-vendor report.

But mobile will grow as a source due to broadband’s low penetration in many emerging markets, as well as the draw of being able to consume premium content on the go.

“Smartphone SVOD take-up will be highest in emerging markets, especially those with low fixed broadband penetration, where disposable incomes are limited,” according to the analysts.

As a result, some 291 million, or 25%, of subscriptions will come directly to SVOD platforms through mobile apps.
In addition, an estimated 170 million, or 15% of the total, will be generated indirectly through mobile operators.
In short, according to these projections, the two mobile sources will drive a combined 40% of total subscriptions worldwide by 2025.
Also by 2025, total indirect subscriptions through partnerships with mobile operators or distribution deals with pay-TV operators are projected to reach 346 million, or 30% of the total.
“A major advantage to SVOD platforms of partnerships with local mobile or pay-TV operators is immediate access to their subscribers,” observes Simon Murray, principal analyst at Digital TV Research. “Local players can also undertake billing in local currencies. The operators gain commissions and kudos from carrying the SVoD platforms.”

Netflix already has partnerships with 111 of the 493 operators surveyed by the researcher, and Amazon Prime Video has 52.

In another new report, the researcher projects that the average smartphone SVOD subscriber will pay for 1.83 gross SVOD subscriptions by 2025. That’s up from 1.45 in 2019 — although it’s still somewhat lower than the projection for fixed broadband homes.

apps, digital, mobile, smartphone, subscriptions, svod, television, video
1 comment about "40% Of Global SVOD Subscriptions To Come Via Smartphones By 2025".
Check to receive email when comments are posted.
Next story loading