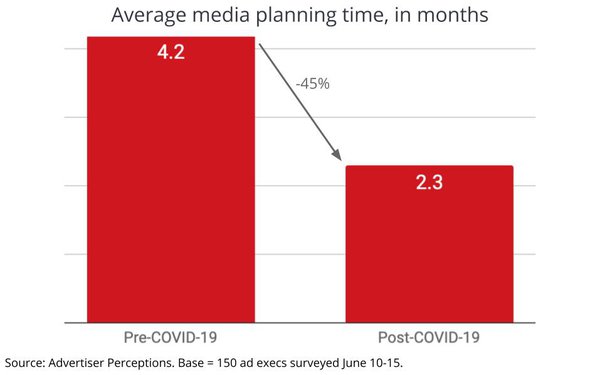 In what could be an anathema for the 2020-21 upfront and other long-term media-buying decisions, U.S. ad execs say the average lead time for their media plans has been cut nearly in half since the COVID-19 pandemic hit.

The average amount of time for U.S. media plans has fallen to just 2.3 months post-pandemic vs. 4.2 months pre-pandemic, according to the most recent wave of tracking surveys conducted among advertisers and agency executives by Advertiser Perceptions.

Eighty-seven percent of the ad execs in the most recent survey -- Advertiser Perceptions' sixth wave, fielded June 10-15 -- said flexibility is the name of the game for the duration of negotiating contracts with the media.

"Tactical decisions are becoming increasingly strategic, and all is fluid and ever-changing," said one C-level executive from a financial services marketer interviewed by Advertiser Perceptions.

On the bright side, ad budgeting appears to be firming up as the spread between those ad executives -- both advertisers and agency media buyers -- increasing vs. decreasing ad spending is reducing by quarter. While a greater percentage (40%) of execs still expect to decrease spending in the fourth quarter vs. those increasing (23%), it's moving in a positive trajectory vs. the second and third quarters. 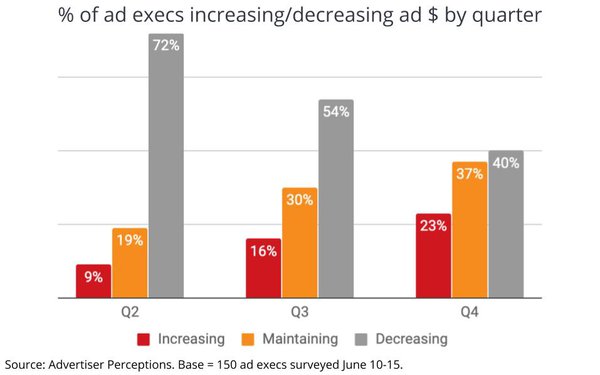