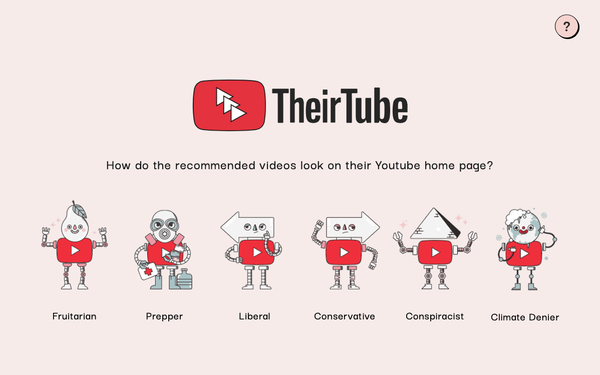 It's clear that search engines have bias -- from environmental to scientific and political. Now a project from web-browser Mozilla details just how much search engines and recommendation algorithms can sway opinion.

YouTube’s recommendation algorithm accounts for nearly three-quarters of all videos viewed on the site, trapping people into searching and reading information that is specific to their world views.

The Mozilla-funded project TheirTube now gives people an opportunity to experience what YouTube recommends for friends and family who have different perspectives on politics, climate change, and even seemingly innocuous subjects like diets.

TheirTube was developed by Amsterdam-based designer Tomo Kihara with a grant from Mozilla’s Creative Media Awards.

The awards support projects exploring how AI is reshaping society in good and bad ways. Interviews with real YouTube users who experienced “recommendation bubbles” also helped to create the project.

The project builds on Mozilla’s efforts to pressure YouTube to become more transparent about its recommendation algorithm.

In August 2019, Mozilla wrote YouTube a letter raising issue about harmful bias and urged the company to openly work with independent researchers to understand the scale. The two companies met about a month later. YouTube execs acknowledged the problem and explained how they would fix it, including removing content that violates their community guidelines and reducing recommendations of "borderline" content.

Not enough was done to stop the problem, according to Mozilla, so in October 2019, the company published YouTube users' #YouTubeRegrets, a series of videos that the company says were triggered by the platform's algorithm bizarre and dangerous recommendations — from child exploitation to radicalization.