TCM Renews Relevance, Provides Context For 'Gone With The Wind' 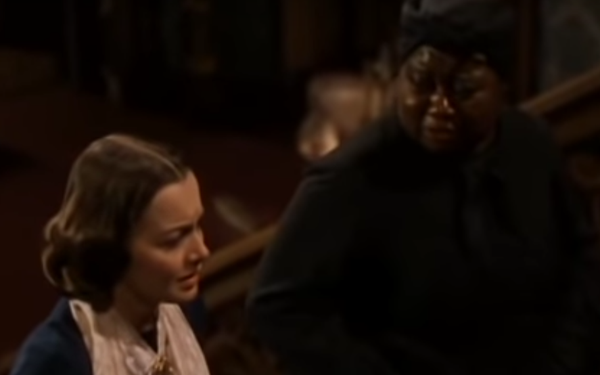 From left, Melanie (Olivia de Havilland) and Mammy (Hattie McDaniel) in "Gone With the Wind."

After pulling “Gone With the Wind” from its roster last month, HBO Max re-released the controversial 1939 film with added background materials. A five-minute intro notes that “GWTW” “denies the horrors of slavery.” And a supplemental one-hour video addresses “The Complicated Legacy of ‘Gone With the Wind.’”

Both pieces of contextual material had one source in common: Turner Classic Movies.

The film scholar who made the introduction was TCM host Jacqueline Stewart. The supplemental video was a panel discussion held during the TCM Classic Film Festival in April 2019, moderated by author and historian Donald Bogle, who also appears frequently on the channel.

Both TCM and HBO share a corporate parent — AT&T’s WarnerMedia — but this was probably the first time there was any kind of synergy between the two cable channels.

But maybe not the last?

HBO Max does have other classics in its library —  such as the-most-famous old movie ever — “Casablanca” — that could also benefit from knowledgeable introductions.

In any case, the “GWTW” move showed the increased relevance of the nuances of cinema history, which TCM has long made its specialty.

As a fan of TCM, I’m happy for any initiative that increases its chances of survival in the volatile TV/video world. After all, it’s an odd duck, probably the only non-premium cable channel that doesn’t sell advertising.

Still, TCM does make many efforts to keep current. It recently introduced older viewers to the concept of podcasts (perhaps condescendingly referencing “the golden age of radio”) with its first one, “The Plot Thickens,” about director Peter Bogdanovich. TCM also airs younger films to expand the time frame for what’s considered a “classic,” and repurposes its standard repertory under different themes.

For example, this month’s “Feel-Good Films,” from comedies to musicals to madcap crime, kept in touch with the current need for escapist fare, as hosts — all filming from their homes — pointed out.

Sometimes, the relevance is sheer serendipity. Last month, with current events renewing emphasis on the Black experience, a series on “Jazz in Film” discussed topics such as why Billie Holiday’s only part in a feature film, “New Orleans,” had her playing a maid.

Which brings us back to the complicated legacy of Mammy — and the fact that TCM was the place to go for relevant programming after the recent death of Olivia de Havilland, the only surviving cast member of “GWTW” for many years. Now, she joins Mammy (Hattie McDaniel, who was the first African American to win an Oscar for that role), Vivien Leigh, Clark Gable and Leslie Howard in that great big movie-star heaven.