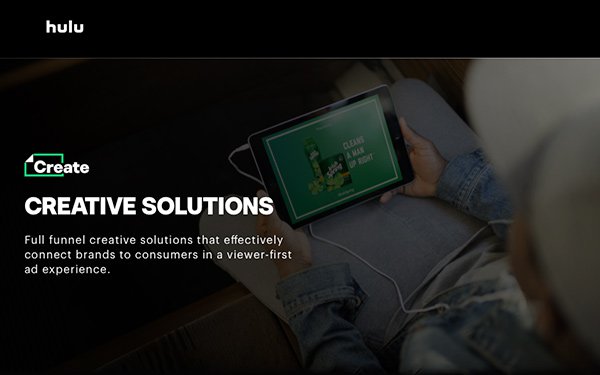 Following up on its effort that allowed small businesses to buy advertising times through a self-serve ad manager, Hulu has launched creative advertising services for small and-medium-sized businesses.

The effort looks to either repurpose existing video for streaming TV or to provide services for businesses that want to start from "scratch."

Hulu will provide these businesses with access to creative partners who can create unique commercials -- rather than ads from standard-looking "templates." Creative partners include video services -- Genero, Shuttlerock, QuickFrame and VidMob.

In July, Hulu began offering the Hulu Ad Manager program for small and medium-sized businesses in a beta effort.

Companies can make media deals for as little as a $500 media campaign on Hulu.

Hulu pulled in $670 million in paid advertising -- and $1.27 billion in subscription fees -- according to an analysis of Walt Disney’s yearly 10K filing for 2019.

Hulu has said it has made advertising deals overall with the top 200 brands in the United States.