Following the surge ignited in March by the COVID-19 pandemic’s forced stay-at-home mode, video viewing growth actually accelerated in Q2, according to Brightcove’s Global Video Index for the period.

Views increased by 40% globally and 64% in North America during the quarter — particularly notable given that Q2 typically sees slower growth than Q1. For the full first half, views rose more than 30% globally. 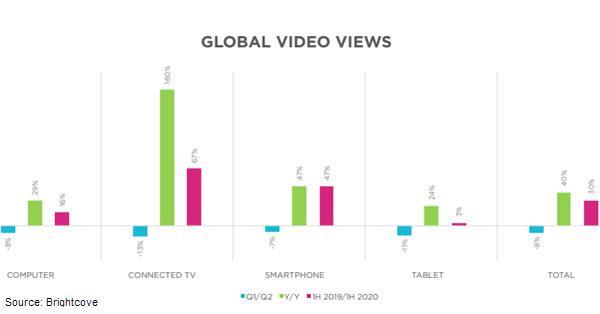 All of which suggests that consumers’ entertainment consumption habits “may be permanently shifting away from linear TV,” the report argues. “The ability to build bundles of content that appeal to individuals’ tastes has been a major draw, one that is going to continue to grow even as traditional TV – especially pay TV – loses traction with consumers, who want to watch when and where they want to.”

“The streaming industry is exploding faster than we’ve ever seen before,” added Jim O’Neill, principal analyst and author of the index. “While much can be attributed to COVID-19 keeping people indoors, stay-at-home orders do not account for the entirety of recent growth.”

Views peaked in April, just before states began their initial attempts to reopen — up 75% year-over-year globally and 103% in North America.

But they continued strong growth in May and June: Global views were up 32% and 16%, respectively.

In the full first half, views increased nearly 41% in North America.

All devices saw growth, but connected TV was the growth leader.

While CTV still commanded just 3% of global views by Q2’s end, that was up from 2% a year ago.

Those numbers point to a “resurgence in larger screens as the viewing medium of choice for entertainment,” notes Brightcove, which also reports that N.A. viewers watch content four times as long on CTVs than on smartphones, followed by tablets (200% longer), and computers (30%).

Smartphones, tablets and computers, as well as CTVs, saw 80%-plus gains in views in April, 39% in May, and 53% in June in North America.

Smartphone video starts rose 37% in Q2. Combining smartphones’ 41% N.A. video viewing share with tablets’ 7% brings mobile devices’ viewing share nearly even with computers’ — which declined to a 49% share from 56% a year ago.

However, inthe first half,total views rose 16% on computers, and 47% on smartphones. Only tablets saw less than double-digit growth for the half, with views up 10% year-over-year in Q1, but only 3% in Q2. 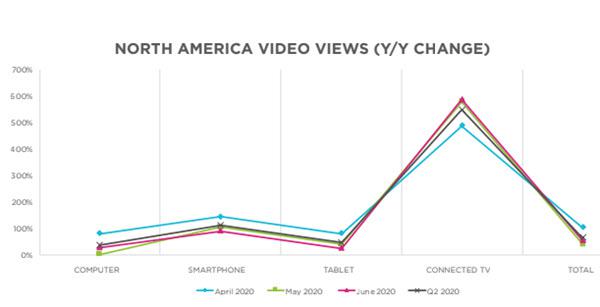 Completion rates for longer content are normally highest on bigger screens. But in this year’s first half, most content, including shorter videos, was completed more often on CTVs. The main exception was the longest content (41+ minutes), for which CTVs ranked third, behind tablets and computers. “Call it the law of small numbers, and let’s see what happens next quarter,” suggests the report.

Views of sports content fell 26% globally in Q2, including 64% in June alone.

Europe (+31%) and the UK (+19%) were two of the only markets that saw significant growth in sports viewing, likely due to professional soccer restarting earlier, notes the report.

“But as COVID-19 flares, declines in sports viewing likely will continue to worsen,” it adds.

Brightcove’s quarterly Global Video Index assesses more than 400 billion data points from its thousands of customers. While the report does not document the online video consumption patterns of the internet as a whole, the company’s video footprint and variety of customers “delivers a representative view of global consumption and engagement trends,” according to Brightcove.