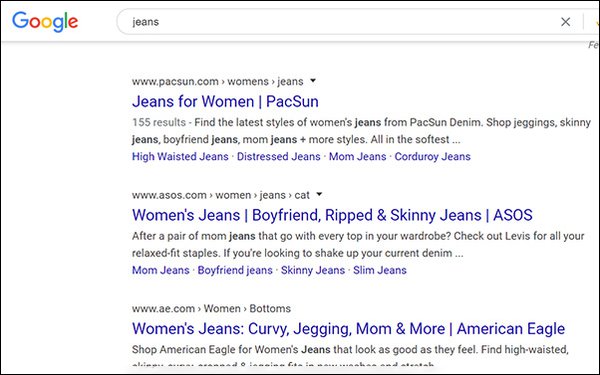 What keywords do you use when searching on Google or Bing or on a retailer’s website for something to sleep in at night? It may not make a difference, according to research released Wednesday.

Searchmetrics’ research analyzed results for 10,000 fashion-related search terms on Google.com and found that even when the search terms did not include a stated gender such as men, boy, woman or girl, around 20% produced first-page results that were identified as being gendered.

The data suggests that online fashion retailers should review the top keywords they are targeting and check whether Google has a gender bias for those terms.

Marketers should take this into consideration when building their SEO and content strategy, according to Karl Kleinschmidt, SEO manager at Searchmetrics.

A search for “jeans” on Google primarily returns search results for females because, Kleinschmidt says, Google skews the term toward females. The search volume for “men’s jeans” is about 73% of the search volume of “jeans,” suggesting that when men search for “jeans” and see search results only targeting women, they revise their search query and try again, according to the data.

Marketers who previously wanted to target search terms that did not include a gender word, would have to create a gender-neutral page oriented at both men and women. Searchmetrics data shows that some major retail sites are taking note of the growth of gendered keywords and building their sites without gender-neutral pages.

Removing gender-neutral pages from an ecommerce site means retailers aren’t cannibalizing their own search performance by targeting the same keywords with multiple pages because retailers don’t want to compete with themselves for clicks.