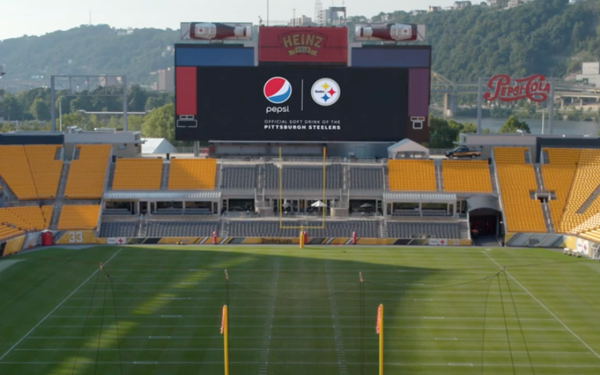 Pepsi is celebrating the return of the NFL -- albeit with a different experience for fans due to the COVID-19 pandemic -- with a short film featuring former Pittsburgh Steeler Ryan Shazier and the story of some dedicated fans.

Tim and Pat Dougherty are dedicated Steelers fans who are mourning the ability to attend games this year, despite a long history of doing so.

“Every Game is a Home Game,” directed by Gabriela Cowperthwaite (director of the “Blackfish” documentary), aims to be an emotion-laden piece about about family and friends, life and loss, and the thread that football creates between it all.

The four-minute digitally native film from VaynerMedia is the latest initiative in Pepsi's larger "Made for Football Watching" campaign, which spotlights and celebrates the "elite" football watchers around the country and helps bring the stadium experience home to them. It aims to resonate with fans across the country, no matter which team they root for.

"Pepsi has always been an endemic part of the football viewing experience -- whether it's in a stadium or on your couch,” said Todd Kaplan, vice president, marketing at Pepsi, in a release. “While things may look different this year, fans still share an unapologetic passion for the sport of football through the at-home viewing occasion. While everyone may not have the athleticism of an elite athlete on the field, we all are made for football...watching.  We believe the Sunday ritual of watching football at-home is definitely something worth celebrating."

Tim attended his first Pittsburgh Steelers game over 50 years ago in the late '60s, when his dad took him to Pitt Stadium for a Steelers’ home game against the Packers, and has had season tickets since the early '70s.

Pat continued the tradition his father started in the '60s, and they have been going to Steelers games together for almost 20 years.

After a difficult year, the two are looking forward to making every game a home game with their regular stadium seats right at home.

Pepsi is also offering  sweepstakes for a “Tailgate in a Box” which includes a $150 NFLShop.com card, speaker, parking lot blanket, projector, tailgate-worthy cooler and more! Consumers can enter by retweeting a Pepsit tweet with #tailgateinabox and #sweepstakes.

Beginning September 8, Pepsi will offer a suite of social filters.

Pepsi created various designs to help immortalize the football watcher, whether you're the "Offensive Channel Changer" or the "First Down Chip Dipper."