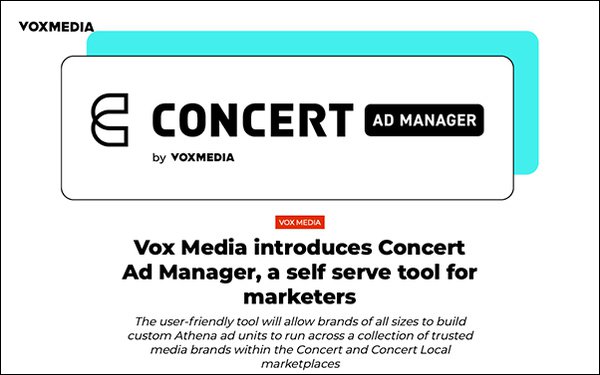 Vox Media’s new self-serve tool Concert Ad Manager is aimed at small- and medium-sized businesses that want to build and launch ad campaigns at scale across premium publishers in the company's marketplaces.

“Until now, scaled access to top-tier publisher environments has been inaccessible to the vast majority of marketers,” stated AJ Frucci, vice president of programmatic advertising and head of Concert. “With Concert Ad Manager, we are extending the unique pillars of Concert... to a broader pool of marketers than ever before.”

The new product is being tested with about 12 brands, including Jupiter, RéVive Skincare and Parallel Markets.

Advertisers that use Concert Ad Manager can access inventory from publishers such as NBC Universal, Penske Media, Condé Nast, Buzzfeed and Hearst Newspapers in the Concert marketplace.

It can also ad target, based on location, audience interests, device or contextual channels, such as travel or entertainment.

Within Concert Ad Manager, advertisers can access a dashboard management system to create and submit ad campaigns for approvals, as well as launch campaigns and see real-time performance.

Vox Media will also share data on when and where ads perform best, based on the company’s experience creating over 12,000 custom ad units in the past three years.