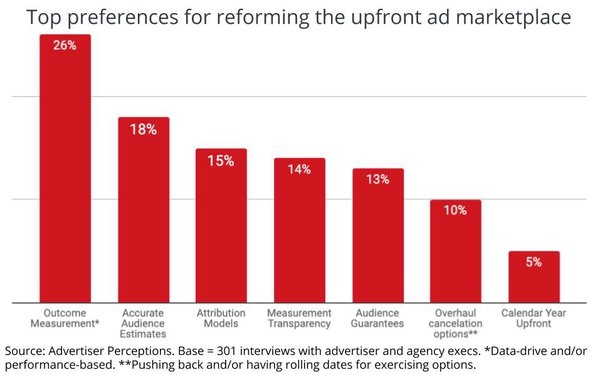 On the heels of recent news that apex TV advertiser Procter & Gamble no longer considers the upfront vital, Advertiser Perceptions released findings of a survey of major advertisers and agencies indicating that -- while some reforms are definitely desired -- the upfront still is an important way to buy and sell media.

The study, which was fielded among 301 senior advertisers and agency executives, found that while the COVID-19 pandemic definitely had an effect on upfront media-buying plans, business got done and many considered the virtual upfront and digital NewFront presentations to actually be a better experience.

Three-quarters of respondents said the virtual upfronts (74%) and NewFronts (75%) were just as or more effective than the traditional in-person events.

While this year's upfront deals had more flexibility built in to them than in normal years, respondents indicated that business nonetheless got done and that the major reforms they are seeking are not about delaying the upfront or moving it to calendar-year timing, per se, but more about improving measurement and attribution related to upfront advertising buys (see chart above).

“The real issue around the upfront is measurement and transparency, which is at a critical crossroads for the TV business,” Advertiser Perceptions Executive Vice President Andy Sippel said in a statement provided with the release of the report, noting: “Digital media are accustoming advertisers to more granular measurement of audience and potential impact.

Advertisers want more of this from TV, and they're more concerned with the terms of the deal than the timing of the negotiation.”