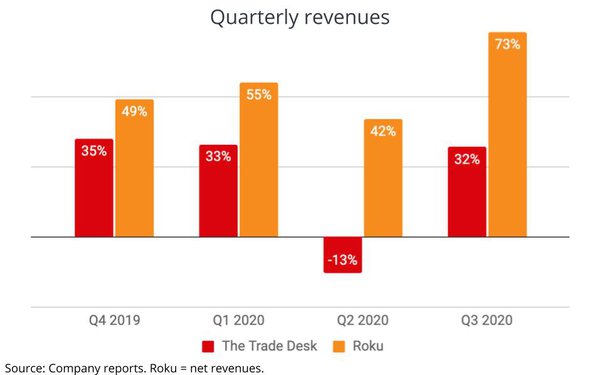 TTD, which has become the default programmatic media supplier for many advertisers and agencies, reported a 32% gain in third quarter revenues, largely on the basis of improved CTV advertising.

That compares with a 13% decline in the second quarter, but is in line with TTD's recent growth in the quarters leading up to that.

While the company did not break out explicit CTV revenues, a company spokesperson said: "Our CTV growth is exploding (up more than 100% in the third quarter), as more consumers switch from cable to streaming and advertisers can apply data to their massive TV campaigns in ways that are simply not possible with linear. Major advertisers, such as [Procter & Gamble], have recently indicated that their approach to TV advertising is changing radically and that they are doubling down on data-driven advertising."

She added that Roku believes the growth is also being driven by "advertiser wariness around the divisiveness of user-generated context on walled gardens such as Facebook and YouTube. As more broadcasters launch premium streaming content, now they have an alternative that scales."

Roku also did not break out CTV advertising figures in its earnings release, but the company stated the third quarter was its strongest yet, "driven by strong growth in advertising as brands embraced connected TV platforms like Roku."