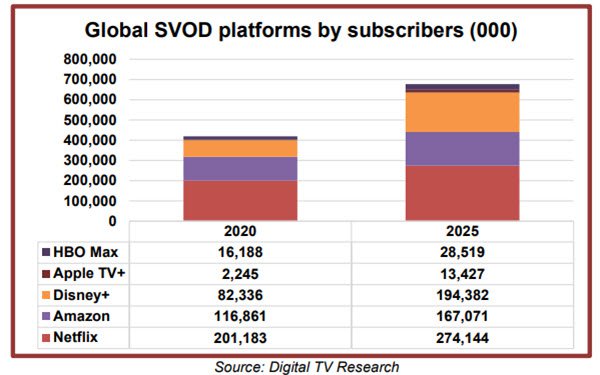 Disney+ subscriptions are projected to grow by 112 million, or 58%, to reach a global total of 194 million.

That would make Disney+ the No. 2 SVOD in size, bumping current second-ranked platform Amazon Prime Video down to third place.

The researcher projects that Amazon subscribers will increase by 50 million, or 25%, to reach 167 million.

Apple TV+, now at an estimated 2 billion subscribers, is projected to add 11 million, to reach 13 billion.

The report projects that Netflix’s revenue will reach $37 billion, up from $17 billion in 2019.

Disney+, which is just turning a year old, should reach revenue of $13 billion by 2025. While that represents impressive growth, it lags Netflix’s revenue growth because Disney charges lower prices in developing markets, resulting in lower ARPUs, according to Digital TV Research.

“Much of Disney+’s initial growth came from the U.S., mainly due to the attractive bundle of Disney+ with ESPN+ and Hulu,” noted the firm’s principal analyst, Simon Murray. “More recently, India’s Disney+ Hotstar subs count has rocketed due to its coverage of IPL cricket. The U.S. and India will account for nearly half of Disney+’s subscriber base by 2025.”