Why Pay-TV Operators Are Scrambling: Sub And Revenue Growth Curves Both Favor OTT 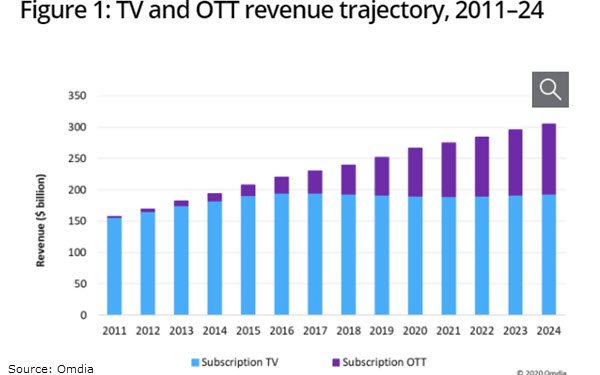 The pandemic-driven surge in streaming has accelerated over-the-top video subscriptions, driving them to exceed pay-TV subscriptions on a global basis in 2020, rather than one or two years from now, as some researchers had projected.

Omdia, for example, now projects that global SVOD subscriptions will reach 1.064 billion this year, a steep increase from 2019’s 849 million. That compares to a projected 1.05 billion pay-TV subscriptions this year, up only modestly from 1.049 billion last year.

And while the global OTT growth rate is expected to slow somewhat next year, it will continue to see substantial growth as pay TV’s flattens, resulting in 1.421 billion SVOD subs by 2024, versus 1.064 billion pay-TV subs.

As we know, the U.S. epitomizes the trend of growth in SVOD subscriptions and decline in pay-TV subscriptions.

Meanwhile, globally, subscription OTT’s share of revenue has increased from 1% in 2011 to nearly 25% in 2019 (chart above), and is projected to reach 37% by 2024, Omdia Senior Analyst Ismail Patel recently reported.

The global net change in traditional pay-TV revenue will average a loss of $185 million for the period from 2017 through 2024.

The trends are obviously the impetus for a growing number of pay-TV operators -- including AT&T -- to transition away at least partially from their traditional models to OTT, he noted.

That’s further underscored by Omdia’s principal analyst for TV, video and devices, in a new report, “Consumer Trends in a Connected World.”

“Timing is everything, because cord-cutting is now spreading beyond the U.S. and will be increased by the COVID-19 pandemic, which coincided with the launch of direct-to-consumer services from globally recognized brands” such as Disney, she recently told the researcher’s sister company, Digital TV Europe.

“Pay TV operators must act quickly to retain their customer bases and drive the value of their offerings and services” while they can still benefit from wide reach and ownership of the set-top box, which is still “a key driver of value perception for pay TV against OTT services,” she said.

OTT’s penetration is now higher than pay TV’s in Brazil, Germany, the U.K. and Japan, and is catching up in the U.S., France and India, she reported.

Pay-TV operators need to pump up the STB’s value through advanced functionality such as the ability to provide recommendations outside of the content provider’s app, as well as by becoming aggregators of multiple services and content, she stressed.