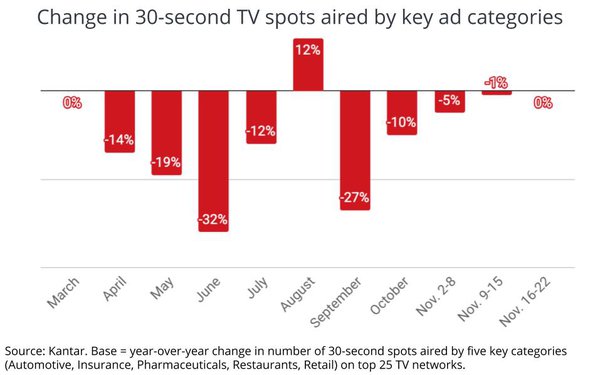 After months of double-digit percentage declines, for the week of November 16-22, the number of advertising commercial messages are now flat versus the same week the year before, in terms of total TV advertising occurrences for top categories -- automotive, insurance, pharmaceutical, restaurants and retail.

At its worst, in June, the number of advertising occurrences was down 32% from the same month in June 2019. It was 27% lower in September, with a 10% drop in October. In March -- the month when the pandemic started -- there was no change in ad occurrences among the top networks.

Kantar attributes the current improvement to announcements related to vaccines and the start of the holiday season.

The individual categories that gained the most in the most recent week were automotive and restaurants -- up 21% and 25%, respectively. Pharmaceuticals were 16% higher, while insurance added 2%.

Only retail continues to struggle -- down 14% versus the same week a year ago. That said, retail has made improvements in recent periods -- sinking 34% for September, and off 23% for October.

The worst-performing category for any month-long period during the pandemic was automotive, which dropped 50% in April and 41% in May.