It's The Disinformation, Stupid 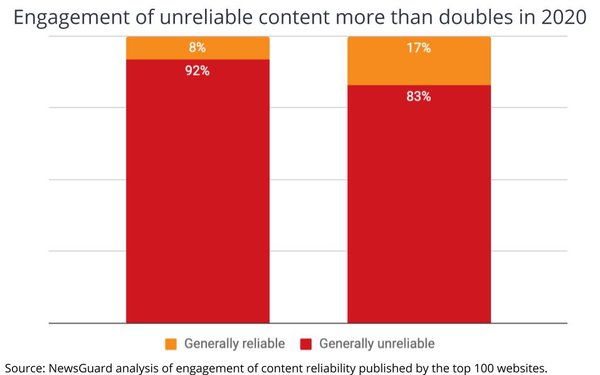 Numerous studies and analyses showed a growing disconnect among Americans' sense of reality during 2020, and a new year-end analysis from news and information content rating system NewsGuard helps explain why.

During 2020, the share of engagement of content rated as "generally unreliable" published by the top 100 websites more than doubled to 17% from 8% in 2019.

That helps explain the findings of a variety of tracking studies from reputable analytics firms ranging from Pew Research Center to Ipsos/Reuters, which found that Americans are increasingly divided into two versions of reality: the actual one and an alternate one.

As 2020 comes to an end -- as well as one of the most disreputable and untruthful administrations along with it -- will next year return to a more balanced sense of reality? You know, one based on facts, not divisive demagoguery?

It shouldn't be surprising that disinformation spreads faster and engages more than fact-based content. That finding has already been well established.

The question is whether we can put the Pandora back in her box.

I have no doubt that hostile actors -- both domestic and foreign -- will continue to wreak as much havoc via content publishing, but hopefully Americans will start burning out on the actual "fake news" kind and seek some common truthful ground.

Thanks to organizations like NewsGuard, Pew, Ipsos, and the German Marshal Fund, we can at least keep track of that.