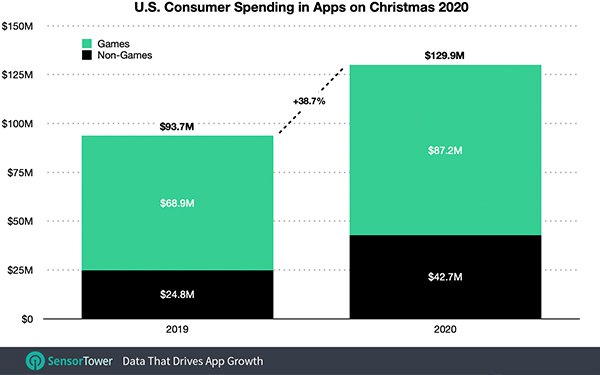 Spending on mobile apps and games in 2020 had a record-breaking year, surpassing $100 billion for the first time ever in November.

This trend continued through to Christmas, when consumers worldwide spent an estimated $407.6 million -- up 34.5% -- across Apple’s App Store and Google Play, according to preliminary Sensor Tower Store Intelligence estimates.

Mobile spending on Christmas comprised 4.5% of the month’s total spend so far, which reached approximately $9 billion globally from December 1 to December 27. The majority of the holiday spending was on mobile games, which climbed 27% from $232.4 million during Christmas 2019 to $295.6 million this year.

Apparently it cost more to get consumers to spend.

AppsFlyer earlier this year published a post stating that the cost per app install spiked 30% post-COVID-19 lockdowns, leading to higher spend, despite a drop in non-organic installs.

The competition for user attention accelerated this year, and with it the cost per install jumped 30% between April and November — a trend that was seen in self-reporting networks and non-SRNs, according to AppsFlyer.

Many app marketers tend to look at the app ecosystem, and even their own category’s competitors, per the data, but the reality is they compete with anyone who advertises on a given platform.

Entertainment generated the most revenue outside of games on both Apple’s App Store and Google’s platform, according to Sensortower data.

On the App Store, Entertainment apps took 21.8% of all non-game spending, reaching $19.3 million. On Google Play, the category generated 18.5% of all revenue generated, about $4.3 million.

Outside of mobile games, TikTok took the top honors in terms of consumer spend, generating $4.7 million globally in revenue on Christmas.