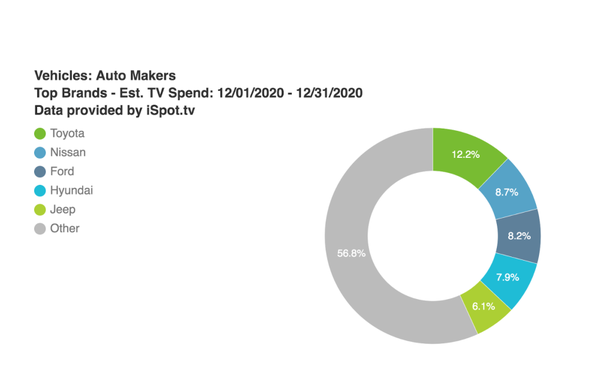 Automakers had more than a 40.3% increase year over year on TV ad spend in December, according to iSpot.tv

However, impressions were actually down 5% this December.

For the entire month, 10 different automaker ads were seen at least 700 million times. Chevrolet's “Wherever You Go” spot, which advertises how the General Motors' employee discount is available for everyone, had the most TV ad impressions, with 1.46 billion. It was the second straight month that Chevy had the most-seen ad in the industry. In all, nine of the top 10 spots by impressions were focused around holiday sales to close out 2020, per iSpot.

“Automakers’ late TV ad push in December showcased both a commitment to traditional late-year sales and an increased confidence in consumer spending heading into 2021,” Schwartzapfel tells Marketing Daily. “With an expanded NFL Playoffs ahead in January, these brands should see an even larger opportunity to reach audiences during games as they showcase new messaging and vehicle stock.”