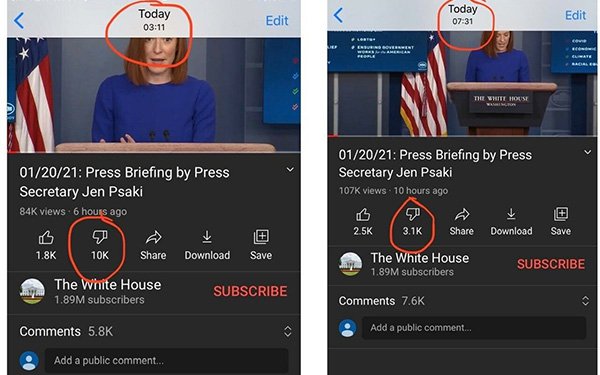 Zach Vorhies, former senior software engineer at Google and YouTube, now self-proclaimed whistleblower, has started his own investigation into disappearing dislikes for a Joe Biden video. The "dislikes" or thumbs-down icon shows the video with 1.9K "likes" and 11K "dislikes," while the same video shortly after shows 2.4K Likes vs. 4.8K Dislikes, dropping the original number of Dislikes by more than half.

The videos were uploaded or streamed from the official White House government YouTube page. In the example posted by Vorhies, no one has contested his assertion, and Twitter has not labeled the tweet as misinformation. The post has received 2.7K retweets, 425 comments, and 4.5K Likes.

It’s important to note that at one point Vorhies leaked documents to the right-wing group Project Veritas, then became a committed anti-vaxxer (vaccine) and promoter of QAnon. Last year he laid out a plan to promote “Plandemic,” a pair of 2020 conspiracy theory videos produced by Mikki Willis that Wikipedia claims promote misinformation about the COVID-19 pandemic.

Vorhies' post on Twitter set off a firestorm of followers on several platforms, including Gab.com, where TexasVet posted similar images of Press Secretary Jen Psaki on Wednesday at 3:11 and then again at 7:31. The earlier post, time-stamped at 3:11, shows 1.8K likes and 10K dislikes for the video. The 7:31 time-stamped still image of the video shows 2.5K likes and 3.1K dislikes, cutting the dislikes by more than two thirds.

YouTube notes the policies and systems in place to ensure that engagement on YouTube is authentic, and that fraudulent metrics are removed. Sometimes the Likes or Dislikes are a result of spam, according to YouTube documents, at which time they are removed.

This de-spamming process is ongoing, per YouTube. It starts as soon as a video is uploaded and continues to ensure that all metrics are valid.

It turns out this happens more often than some think, and it can become an issue. A 2019 article on The Verge calls attention to “Dislike mobs,” which are the YouTube equivalent to review bombing that negatively impacts a product or service.

Engagement metrics on videos are updated regularly to reflect organic engagement. This process initiates as soon as the stream starts and continues for several hours.