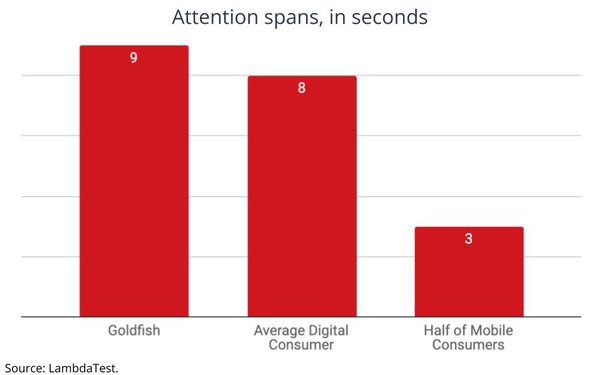 One of the most persistent metaphors used to describe the evolution of media consumers is that they increasingly behave like drug addicts.

And while in the past, the most common addictive analogy might have been opiates -- as in an insatiable desire to want more -- these days they seem more like speed freaks looking for the next fix.

That hit me during this week’s CIMM (Committee on Innovative Media Measurement) summit, which, while mostly about TV and digital video, did address the fact that consumers are increasingly demanding quickly engaging media experiences, or they will almost immediately move on to the next new thing. According to some new research, that's definitely true about mobile consumers.

More than half of mobile users leave a website that takes more than three seconds to load, according to the research released last week by browser testing platform LambdaTest.

That’s a heck of a lot faster than the obligatory PowerPoint presentation slide comparing the average digital consumer’s attention span (eight seconds) to less than a goldfish’s (nine seconds), and suggests that the engagement stakes are even greater when visiting sites via a mobile device.

“Mobile users do not spend time waiting for the entire website to load,” explains LambdaTest CEO Asad Khan, noting: “They want results immediately and within seconds, almost at first glance. The first impression is often the last impression in a web presence, and if your website takes time to load completely, they won’t wait. If your website is not presentable or breaks on their browser, they won’t stay. If your website has an important element say two scrolls down, they will switch.”

This obviously has huge implications for the entire media ecosystem -- even TV and video -- because consumers increasingly are accessing all forms of content and commerce via their mobile devices.

According to projections from Google, by 2025, 70% of all internet users worldwide will be using their mobile phones to access the internet.