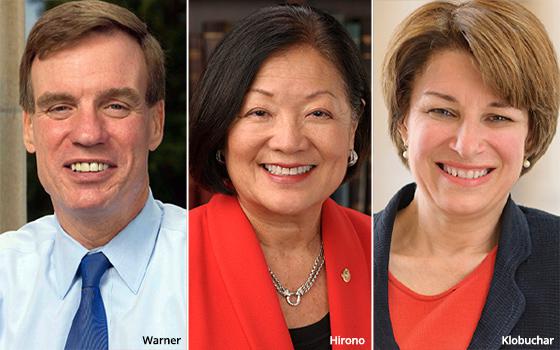 Three Senate Democrats have unveiled a new bill that would strip tech companies of their protections against civil lawsuits for a broad range of posts by users.

The authors of the Safeguarding Against Fraud, Exploitation, Threats, Extremism and Consumer Harms (SAFE TECH) Act say the bill would “reform” Section 230 of the Communications Decency Law by allowing lawsuits against companies that enable cyberstalking, harassment, and discrimination on their platforms.

But critics say the proposed SAFE TECH is so broad that it would effectively repeal the 25-year-old media law.

Currently, Section 230 broadly immunizes web publishers, including social platforms, from liability for content posted by users -- including posts that are libelous, harassing or unlawful.

Among others, the proposed law would exempt ads or paid content, as well as content that violates laws against stalking, harassment and intimidation on the basis of race, religion or other protected classes.

Other provisions in the proposal would allow for lawsuits alleging discrimination, as well as wrongful death lawsuits.

Advocacy group Fight for the Future is opposing the bill, arguing that the measure is so sweeping that its effect would be similar to repealing Section 230.

“Unfortunately this bill, as written, would have enormous unintended consequences for human rights and freedom of expression,” the group stated. “It creates a huge carveout in Section 230 that impacts not only advertising but essentially all paid services, such as web hosting and CDNs, as well as small services like Patreon, Bandcamp, and Etsy.”

Senator Ron Wyden (D-Oregon), who authored Section 230, reportedly said Friday that the SAFE TECH Act would “devastate every part of the open internet, and cause massive collateral damage to online speech.

To date, tech companies have generally prevailed in court when they have been sued over user posts -- including material that is harassing or discriminatory.

For instance, the 2nd Circuit Court of Appeals ruled in 2019 that dating app Grindr couldn't be sued over harassment that occurred through its app. In that matter a former boyfriend of Matthew Herrick impersonated him on Grindr. The ex-boyfriend allegedly posted Herrick's photo and a fake profile of him. Over the next five months, more than 1,100 men appeared at his home or workplace, according to his lawsuit.

When Herrick sued Grindr for allegedly facilitating the stalking, Grindr successfully argued it was protected by Section 230.

Courts have also dismissed lawsuits by terrorist victims who alleged that social media companies allowed their platforms to be used for recruitment.