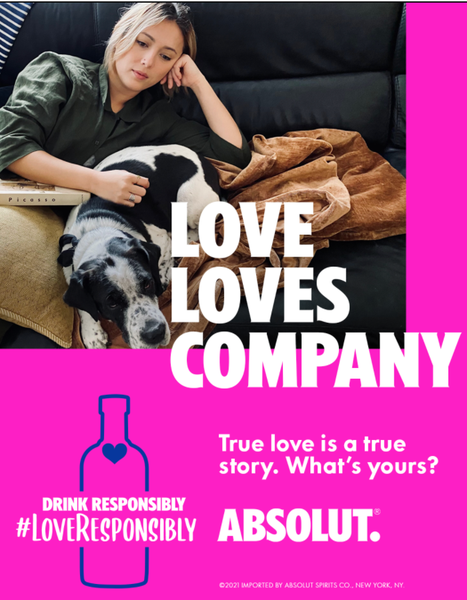 Although relationships are being tested due to living conditions caused by the pandemic, Americans are still interested in celebrating Valentine’s Day this year, according to research from Pernod Ricard USA’s Absolut vodka brand.

Absolut’s survey discovered nearly 40% of Americans have said their closest loving relationships are strained by the pandemic, with the highest number among Millennial and Gen Z respondents -- 52% of Gen Z-ers,  43% of millennials, and 44% of Gen X-ers, compared to 29% of baby boomers.

And yet, the majority of people still want to celebrate love, with 81% of Americans saying that celebrating Valentine’s Day is just as important, or even more important, than last year, according to the survey, which was commissioned in partnership with KRC.

The survey points to the resilience of love. About one in five Americans (21%) have turned inward and experienced more self-love in the past year. A variety of ways to love beyond a romantic partner have become more important to Americans in the past year, including relationships with children (27%) and pets (26%).

So the company is urging consumers not only to drink responsibly, but to #LoveResponsibly, via  a digital campaign, TV and a consumer social call-to-action from Absolut’s global advertising agency BBH.

Creative features snapshots of love in the pandemic era that inspire everyone -- no matter who they love and how they love -- to love responsibly. It will be driven largely by digital video and imagery. A 15-second spot will premiere during the Golden Globes later this month.

Starting Feb. 12, consumers will be invited to share social video, imagery and text. Select stories using the #LoveResponsibly hashtag will be featured in the Absolut campaign that will run through mid-March.

"Whether that love is with an intimate partner, family, friend, pet, or even your relationship with yourself, we want to learn and share the many ways that people of all backgrounds love responsibly," according to the company. "Consumers can share their answers as written text, video or image with #LoveResponsibly and @AbsolutVodka."

For Valentine’s Day last year, the company launched a campaign with the theme #SexResponsibly which focused on the importance of getting consent from a partner so as not to engage in sexual assault. That campaign included partnership with RAINN, the nation’s largest anti-sexual violence organization.